When you reach the Costa Verde (Green Coast) you pass into Asturias, a region whose pedigree is as ancient as neighbouring Cantabria’s is new.

Two local sayings give a good idea of Asturians’ sense of identity and their role in Spain’s history: Ser español es un orgullo, ser asturiano es un título, “To be a Spaniard is a source of pride, to be Asturian is (to wear) a title.” Asturias es España, el resto es tierra conquistada, “Asturias is Spain, the rest is conquered land.”

The pride, arrogance some say, is born of historical events: the conquering Moors (Muslim forces who invaded Spain in 711)  suffered their first defeat in the peninsula deep in the mountains of Asturias.  And it was a kingdom long before Fernando and Isabel put together the modern state of Spain in the late 15th century. As a result, the region has since been revered by many Spaniards as the “cradle of the Reconquista,” the gradual recovery of the land lost in 711.

La Costa Verde has no trouble living up to its name.  Lush, emerald-green pastures interspersed with pine and beech woods, hedgerows and orchards slope down from the lofty Picos de Europa Mountains to the edge of the sea. 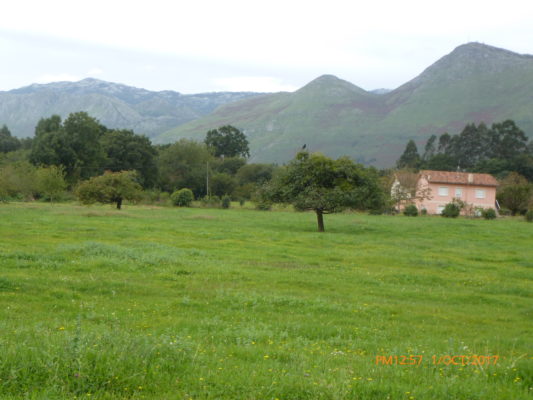 Some of the rivers running into the Atlantic –e.g the Eo, Narcea, Sella, Deva– provide wonderful recreational fishing.  Trout, sea trout and salmon are particularly prized, and requests for licences are so high that the Asturian Fishing Federation uses a lottery system to determine the lucky winners. The dairy farms of Asturias produce the best butter and the best cheese in Spain, and the apple orchards produce the finest cider.

There will be objections from other parts of Spain, but it is true that the quality of these products is exceptional.  Cider is particularly fascinating and the Asturians take it very seriously.  A tasting of cider in a local sidrería is an experience not to be missed: the cider is poured from a height into glasses releasing a mini explosion of sparkling bubbles, but careful… the cider can easily overflow on to the floor in the hands of inexperienced drinkers! Drink it quickly while it is alive with bubbles. A note of caution: cider can be alcoholic, as high as 10%!

If you want to know more about cider, there is a cider museum in the little village of Nava, and for the really serious cider drinkers, there are fiestas in August for ample sampling.

The coastline is a scenic mix of rocky cliffs, sandy coves and picturesque fishing villages, broken only by the industrial ports of Avilés and Gijón.  Although both have attractive historic quarters and sandy beaches, the heavy industry represents another face of Asturias.  Both iron and coal have long been mined in some valleys, and although many mines have now closed, the export of coal and steel still contribute significantly to the economy of Asturias.

There is also a dark side to the history of these coal mines. It was in one of the valleys that a miners’ rebellion broke out in 1934 in protest against the inhuman conditions in which the miners worked. The miners quickly occupied the centre of Oviedo, the capital, and declared a proletariat revolution. The government’s response was rapid, and both side engaged in a brief but brutal war of attrition. As many historians have pointed out, the revolt bore the stamp of a vicious mini civil war and was a prelude to the savage Civil War that tore all Spain apart 2 years later.