The Iberians and the Celts have always posed a problem, but more so the Iberians.  Who were they?

It has been argued that they were migrating tribes who arrived in the peninsula between 3000 and 2000 BC. But where the Iberians came from and how they got there is open to dispute.

Some believe they crossed the Straits of Gibraltar from Northern Africa, others favour a European provenance, which sees them entering via the eastern end of the Pyrenees and proceeding down the Mediterranean coast.

Some suggest that –like the Tartessians– they were survivors of the lost continent of Atlantis, or that they came from America!  Some historians now propose that the Iberians may indeed have been descendants of the Neolithic and early Bronze Age people who earlier inhabited the coastal regions of Iberia.

One scholar, Felipe Fernández-Armesto, questions even the very existence of the Iberians, suggesting that there is “lack of evidence that the “Iberians” ever existed” and adding that sculptures such as the famous damas (“ladies.” See below) could have been the result of  “the interplay of eastern Mediterranean influences on indigenous culture” (201).
What seems reasonably certain is that the people first identified by the Greeks as Iberians (we do not know what they called themselves) were made up of different but related tribes whose presence stretches from the south of the peninsula and runs in an arc along the east and into the south of France.
Some scholars argue for a general division between the Iberians of the north east and those of the south west, the former being more influenced by the Greeks, the latter by the Carthaginians.

What is probably true is that what we now identify as “Iberian” reflects contact with the two trading nations to such a degree that it is sometimes difficult to distinguish any original Iberian feature. For example, the town of Ullastret to the east of Gerona (Girona in Catalan) was once thought to be Greek but is now believed to be an Iberian settlement later modified through trade by the Greeks.

What we can deduce about the Iberians is that they showed a preference for urban life and were a remarkably cultured and artistic people who liked to adorn their sculptures and vases with animals (including bulls), flowers and natural objects.

There are, too, pieces of pottery with human figures dancing or playing musical instruments or bearing arms, many with marked Hellenistic characteristics.  Hundreds of little bronze statues of soldiers, women wrapped in shawls, and figures bearing offerings in their hands can be found in the National Archaeological Museum in Madrid. We have numerous inscriptions on pottery, lead plates, stones and coins, but the script is not Iberian but taken from Greek or Phoenician lettering and has yet to be deciphered.

The high point of their culture is the Dama (Lady) de Elche (Dama d’Elx in Catalan) which, although probably influenced by Greek art, is a magnificent sculpture that reflects a cultured appreciation of beauty. Although likely to be a bust of a young woman, there is some thought that it may actually be of a young man.

Another statue discovered in a tomb near Jaén in 1971 is an equally remarkable sample of Iberian achievement.

Called the Dama de Baza, this full length statue enthroned in a wide-winged chair looks  more like a matriarch –with her simple, rounded headdress and serenely enigmatic look– than the elegant Dama de Elche.

From the Dama de Baza’s ears hang weighty earrings, and her neck and chest are adorned with heavily carved jewellery.  A full length robe adds to the matronly quality. Her down-turned lips suggest a tinge of sadness, perhaps even of slight disapproval. In any case, it is a more expressive face than that of her more famous companion. The reddish colour on the robe and on the chair suggests that originally the entire statue was richly painted; the same was likely the case for the Dama de Elche. 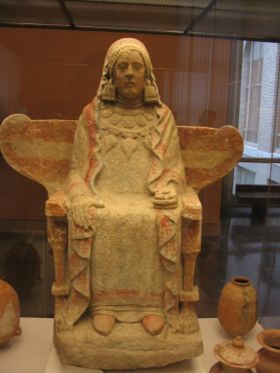 Cavities at the back of both statues now make it almost certain that these damas were in fact funerary statues which contained the ashes of the person buried in the tomb, in both of these cases probably of someone important. The normal Iberian practice for disposing of the dead was to place the cremated ashes in ordinary clay urns which were then buried in simple graves or sometimes in underground caverns.

The Iberians (and Celts) may have disappeared as identifiable groups, but in the 19th and 20th centuries historians and sociologists unearthed their ashes from the past in an effort to fit them into the history of Spain.

They became part of the post Franco dictatorship (ended 1975) search for regional identity which led to demands that artefacts displayed in national museums be returned to their region of origin; for example, both  Elche (Valencia) and Baza (Granada) respectively reclaim their damas presently displayed at the Museo Arqueológico Nacional in Madrid. It’s a fascinating story of how we attempt to make the past fit ideas of nationhood at particular times.