Of all the buildings associated with the Middle Ages, few conjure up more admiration now than the Gothic cathedral. And yet it was not always so.  In fact the description “Gothic”** was coined during the Renaissance as a derogatory term for bad taste when compared to elegant, classical architecture.

**“Gothic” still retains an element of disapproval:Gothic novels, for example, are often characterised by desolate settings, stormy skies and violent, macabre incidents mixing horror and romance.The Oxford and Webster dictionaries include “barbarous,” “uncouth,” “rude,” in their definitions of “Gothic.” Lately it has been vaguely associated with the vogue for vampires.

Gothic architecture first appeared in northern France in the mid 12th century and evolved at a time of far reaching changes: population increase, new trade roots, economic revival, technological advances (from refined water-power techniques to improved commercial enterprises thanks to the introduction of Arabic numerals and the zero –via Spain– and the introduction of paper –the first paper mill in Europe was opened in Spain in 1151), and a renaissance of intellectual activity best seen in the emergence of the universities in the 13th century: e.g. Bologna, Paris, Oxford, Cambridge, Salamanca.

For some 400 years, the Gothic style dominated the architecture of Western Europe, inevitably leaving a profound legacy.

Clearly, from the international nature of both Romanesque and Gothic architecture, more cross border travelling took place than is generally credited for in the Middle Ages.  Pilgrimages, commerce, royal marriages, alliances, wars (including the Crusades), ecclesiastical studies and appointments, the expansion of churches and monasteries, and the building opportunities offered to itinerant master masons, sculptors and craftsmen all stimulated travel.

Like Romanesque, Gothic was a phenomenon admitting different kinds of buildings (palaces, castles, hospices, town and guild halls), but found its greatest expression in church related structures, in particular the great cathedrals that span Europe.

The Church was after all the most prolific builder of the Middle Ages, and the one body that could move people to a common cause and gather money with relative ease to undertake large scale projects.

Unlike Romanesque architecture, however, which radiated from rural monastic orders, and ranged in size from small rural churches to large cathedrals, Gothic churches were the fruit of urban interests and generally built on a larger scale.

Promoted by bishops, royalty and the city fathers of growing towns, their construction involved the entire urban population –merchants, townsmen, peasants, nobles**– and advanced the foundation of a new class of professional builders and “engineers.”  Master masons, who functioned both as architects and builders, (the word “architect” was generally reserved for God, as creator of the universe), sculptors and carpenters were in high demand, and guild lodges (or confraternities) were established to house the fraternities of skilled craftsmen who went to wherever they were invited.

**”The faithful were for the first time to be seen
pulling carts laden with stones, wood, wheat
and other supplies needed for the building of a
cathedral.  … People everywhere humbled
themselves, did penance and forgave their
enemies.  Men and women were seen carrying
heavy loads through bogs, singing and praising
the wonders of God….” “ Since the cathedral was
the symbol of God’s omnipotence, participation
in its construction became something akin to a
mystic experience. This explains the popular
character of Gothic style.” Praeger 198.

*********
Gothic style has several characteristics that distinguish it from Romanesque, although in its general plan it shared many features with its predecessor: e.g. a long nave and two side aisles crossed by a transept, a choir and apse with ambulatory and radiating chapels, the use of towers, a major portal of the west front (usually three doors in the large churches). However, thanks to a new understanding of structural stresses, Gothic buildings rose to unprecedented height.

With the increased height of the walls and the prominent windows, external flying buttresses were added along the sides to prevent a collapse (even so there were disasters, e.g the vault of Beauvais, France).

Following and adding to the Romanesque pattern, the west front of the large cathedrals was flanked by two impressive towers, now often topped by spires or pinnacles.

The entrance usually consisted of triple portals with pointed arches and several archivolts with sculptures depicting saints or bibilical figures or conveying a moral tale to the faithful as they entered the church.  Above the portals a large circular rose or wheel window radiated outwards providing a focal point that at the same time pulled the whole front towards it.  Rose windows also featured frequently above the east and west transept doorways.

What strikes visitors to the great Gothic churches is their luminosity,  verticality and sense of weightlessness.  If the Romanesque church was solidly rooted to the ground, the Gothic soared as if trying to break the bondage of stone to storm the heavens, and our eyes are drawn upwards pulled by the structure points of the arches, the slender pillars and the coloured shafts of light emanating from above.

With the passage of time, the glass in some churches became overpowering: the dark blues and ruby reds almost reducing the light itself but at the same time giving it a luminosity that is almost palpable. If Romanesque comforts in its solidity, Gothic moves spiritually, even mystically some say, like a vision of paradise on earth, or a heavenly Jerusalem.

As was the case with Romanesque, Gothic style was not  limited to architecture; it encompassed art, sculpture, and illuminated manuscripts.

In many ways, stained glass was Gothic’s answer to Romanesque frescoes, and served a similar function: to teach as well as delight and move. Small illustrations of the lives of the saints and biblical scenes appeared in the chapel windows which were at eye level, but at the upper levels of the nave single, large figures were necessary for them to be visible.

Creating stained glass windows was an expensive undertaking and churches often sought wealthy patrons to underwrite the cost. As a result, some windows show benefactors kneeling alongside saints and religious figures. The guilds, too, got into the act, which explains why the windows they funded show craftsmen at work.

*********
The Gothic cathedrals were monumental edifices and extraordinary feats of engineering. They were built to the greater glory of God, but they tell us too a lot about the period –the sources of influence and power– and the builders themselves.

In reaching for the heavens they may have been getting closer to God, it is true, but it was at the same time a sign of self-assurance, if not pride, and Icarus-like a few Gothic vaults did come crashing down to earth (e.g. Beauvais).

The great cathedrals are like epics cast in stone, flowering in France almost at the same time as the literary epics and chivalric adventures of knights errant (e.g. Chanson de Roland ca 1100 and the works of Chretien de Troyes 1160-90+/-).

Spanish Christians shared the epic spirit with their neighbours to the north, but in the same way that the Poema de mío Cid (ca 1200) avoids the flights of fantasy of the French Chanson de Roland and is more realistic, so too most Spanish Gothic cathedrals –both Castilian and Catalan, as we shall see– are more closely bound to the earth, more “realistic”.

A typical plan of a Gothic cathedral is that of Amiens (France): 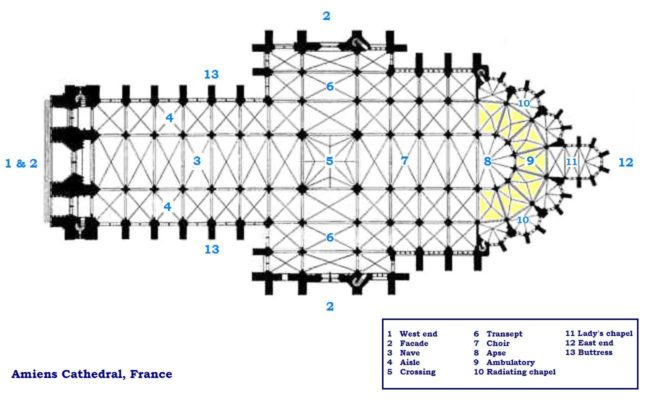