The Great Mosque of Córdoba (La Mezquita) is one of Islam’s finest legacies in Spain. Strange as it may sound, however, the Mosque is also a Cathedral. It came about when Christian forces conquered Córdoba in 1236; the Great Mosque was immediately consecrated as the Catedral de la Asuncion de la Virgen (Cathedral of the Assumption of the Virgin Mary).

Unlike the great mosques of Toledo, Granada and Seville, which were eventually torn down to make way for the present cathedrals, the Great Mosque of Córdoba survived to become nowadays one of the main tourist attractions in all of Spain.

The consecration of the Great Mosque signalled a return to Córdoba’s Christian identity. The Mosque was built on the very spot where a 6th-century Visigothic church, dedicated to St Vincente (San Vicente), had once stood. Artefacts from San Vicente can be seen in the south west corner of the Mosque, and remains of the original church can be viewed in a small excavated area on the west side, near the present entrance. 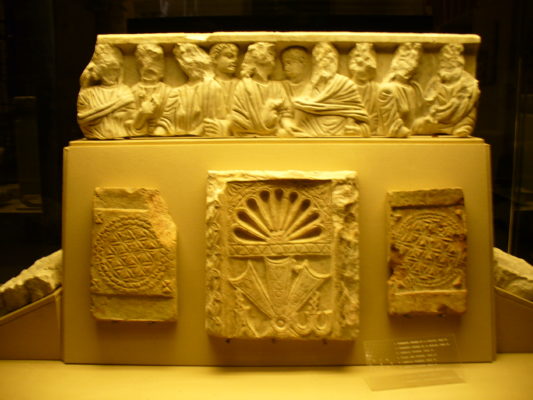 It is the Mosque that visitors flock to see, and the Christian side chapels and large, imposing choir and chancel (la capilla mayor) rising in the very middle of the Mosque are seen as a travesty by many.  But they are not without interest, and certainly offer a unique opportunity to see in the very same building how two major religions –so often at odds with each other— approach and view their relationship with the same God.

Begun by the Emir Abd al-Rahman I in 785, the Mosque was added to by Abd al-Rahman II in 833, before being completed by al-Hakam II and the vizier al-Mansur in the second half of the 10th century. Of the four stages, that of al-Hakam is the most decorative and striking.

The exterior walls of the Great Mosque scarcely hint at the architectural beauty within and our first impression when entering may be disappointing because the inside appears gloomy after the brilliant light outside. But when the Mosque was constructed there was no wall separating the hundreds of columns inside from the treed patio, so that all the northern side was open to allow the light to penetrate through the columns.

The trees planted in rows in the courtyard followed the line of the rows of the columns inside, unifying aesthetically the inner and outer worlds of the worshippers. The Mosque was not just a temple, it was a public building, a meeting place, a school, and a social centre.

Once we become accustomed to the dim light within the Mosque, we realise that we are surrounded by what appears to be a forest of columns, and if we have a Christian background we may even experience disorientation. This is a temple, but unlike a church it does not appear to have a focal point.

When we enter a church, the long and clearly defined central aisle or nave directs our eyes unmistakably to the altar, which we are expected to approach with due reverence. (The most widely used design of churches originated in the Roman basilica, used for public meetings or as a court of justice; mosques are said to derive their form from the Prophet’s house in Medina.)

For Muslims it is important to identify the direction of Mecca for prayer.  This is indicated by the mihrab, a niche or mark in the wall which identifies the qibla, the wall that faces Mecca.  The Great Mosque of Córdoba has an exquisitely beautiful mihrab, part of the addition built during the reign of al-Hakam II.

In front of, and leading to the mihrab, is an equally beautiful, enclosed area called the maqsura, reserved for the ruler and his family.  The mihrab itself is small in relation to the rest of the building, and is almost lost along the southern wall. Originally it occupied a central place along the qibla, but it lost that position when the vizier al-Mansur added a large extension to the eastern side of the Mosque at the end of the 10th century.

The extraordinary effect of the Mosque comes not from the awe evoked by soaring height as in the great cathedrals but from the paradoxical sensation of intimacy and space.  Muslims entering the Great Mosque would immediately be confronted by hundreds of columns (some 1,200 after completion by al-Mansur). And here perhaps lies the extraordinary effect of the Great Mosque.

It’s not simply a spiritual oasis; it is a kind of architectural abstraction in which the columns seem to repeat themselves infinitely, like a mirror of creation whose centre moves according to the location of the worshipper. It is a labyrinth without walls, a spatial arabesque, an extraordinary metaphor for infinity underlined by a constant interplay of  light and shadow.

There is nothing here that demands the eyes’ attention as in a Christian church –no paintings, no sculpture, no tombs, no chairs. There is no story that will direct our thoughts. What we have are geometrical patterns woven out of the pillars (from one location we can see straight lines of pillars intersected at all angles by other pillars) thereby liberating the mind and freeing it for prayer and meditation. What a pity that the light penetrating the mosque is much reduced nowadays. What would it be like if the authorities would open up the Mosque to the patio again! More light would then be seen filtering through the columns and the sense of space or distance magnified.

How that sense of space is conveyed in such a low building is remarkable and yet simple. The columns themselves –some 850 remain of the original 1,200– are slender and elegant. They came to the Mosque from various sources. There are columns taken from Carthaginian, Roman and Visigothic buildings, and others that were gifts from the Byzantine emperor in Constantinople. They vary in height, and rest on bases of different sizes. Some are made of marble, others of jasper and still others of porphyry.

The real secret of space in the Mosque, however, is in the double-tiered arches –with striking alternating red and white masonry– that reach outwards above the pillars, like petrified leaves in a palm forest. The arches –the lower horseshoe in shape and the upper more semi-circular– disperse and break up the sense of weight that an extended low ceiling will produce, and create the impression of endless units pierced by light and air.

The horseshoe shape is an aesthetic master stroke closing in the lower arch, which in turn opens up the simple semicircular upper arch to make it look wider. The horseshoe arch was actually a feature of earlier Visigothic church architecture (sse example in San Juan de Baños); it was the Great Mosque of Córdoba that gave it wide currency, to such an extent that it has now become synonymous with Islamic architecture.

The origin of the double arch is a subject of much controversy, but no-one disputes that they are a major innovation. Many believe them to have been inspired by tiered Roman aqueducts, like that of Mérida which also has alternating red and white masonry in the arches.

Others argue, however, that a similar pattern already existed in Umayyad buildings in the Middle East and that, as the only survivor of the Umayyad dynasty (following its decimation by the Abbasid family in a power struggle in the Middle East), Abd al-Rahman I imitated a technique he was already familiar with, and indeed used it as a sign of continuity with his cultural heritage. His nostalgia for his Syrian home is well known, as witnessed, for example, in the palace he built outside Córdoba and which he named al-Rusafa in imitation of his grandfather’s summer residence.

Whatever the exact provenance of the double arch, all the later additions retained the spirit of Abd al-Rahman I’s original, although the arch work approaching the mihrab is much more complicated and sumptuously ornamented. In the maqsura the alternating red and white coloured arches have been enriched by a breathtaking combination of cream-coloured, multilobed, interlocking and artfully arranged arches whose segments interlace like an architectural symphony.

Above the maqsura a richly decorated ribbed vault –forerunner of the famous ribbed vaulting in Gothic churches– encloses a stunningly patterned small dome. The beauty of the dome with its filigree abstractions, Kufic script, floral motifs, and cascading sunburst radiating from a tiny central star is enhanced by the light that filters and plays through eight latticed side windows.

Around the entrance to the mihrab itself, the horseshoe arch is enclosed by an elaborate rectangular frame (alfiz) containing verses from the Koran and justification for the caliphate of Córdoba written in elegant Kufic characters.

It is an example of the art of calligraphy at its best. Within the frame and immediately surrounding the horseshoe entrance to the mihrab a series of fan-shaped, multi-coloured mosaic configurations lead the eyes outward towards the messages like rays of light leading to the truth.  We can’t but be moved by the sheer beauty of the delicate, intricate designs because they require no ideological background to be appreciated. Around the arch they are like embossed embroidery, with the floral motifs in gold, red, green and blue complementing the decoration of the maqsura dome above

In only one other place was there similarly sumptuous decoration at the time, and that was at Abd al-Rahman III’s dazzling palace at Madinat al-Zahra, just 6 kilometres North West of Córdoba. It so happens that the man who oversaw the construction of that palace was none other than the future caliph and driving force behind the building of the maqsura, al-Hakam II. Both the maqsura and Madinat al-Zahra were an important prelude to the fascinating and dazzling inner world of the Alhambra Palace of Granada.