Camino de Santiago. Why Santiago de Compostela? Why St. James?
That the obscure, medieval settlement of Santiago de Compostela should become the third most important destination for Christian pilgrims in the Middle Ages (after Jerusalem and Rome) is a mystery. Pilgrims headed there to pray at the resting place of the apostle St. James the Greater –one of Christ’s closest disciples (he was one of three disciples present at Christ’s transfiguration –Mark 9: 2-13, Matthew 17: 1-13, Luke 9: 28-36), the first Christian to suffer a martyr’s death and the only one whose martyrdom is mentioned in the New Testament (Acts 12: 2)

The Location.
Where exactly is Santiago de Compostela? It’s located in Galicia in the isolated north west of the Iberian Peninsula, an area that has always lent itself to mystery and fantasy. Often bathed in mists and rain, it is hilly and tree covered and edged by a wild, stormy coastline. 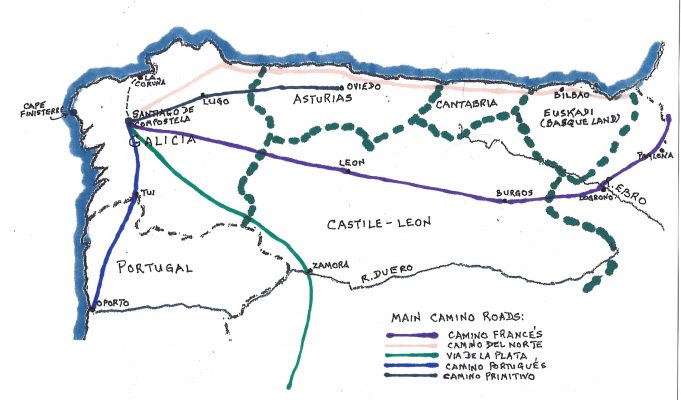 Early on, it was populated by Celts, Druid-led worshippers of nature and believers in mystery and magic (including lycanthropy, the transformation of humans into werewolves). And as sun worshippers, the Celts would have noted, on this stretch of the turbulent Atlantic coast, the death of the sun followed by impenetrable darkness. The sight would have inspired considerable awe and wonder and prompted rituals to ensure the return of the sun. It seemed like the end of the world, a menacing concept the Romans captured in the words finis terrae (“the end of the earth”) from which we get the Galician location: (Cabo/Cape Finisterre, Cabo Fisterra in Galician). However, geography and climate alone are surely not sufficient in creating such an important and influential Christian pilgrim destination. We’ll return to this under Signiificance, below.

Why St. James/ Santiago?
As fertile ground for rituals, it was certainly not impossible for the cult of a saint to take root in Galicia. The question is … why St. James? How did the veneration of his bones get established so far from the scene of his martyrdom in distant Jerusalem? There is, in fact, no evidence that St. James ever visited Roman Hispania and the description of the miraculous transfer of his remains to Galicia after his execution is pure fantasy.

Tradition has it that his relics were transported by two disciples, guided by an angel, in a crewless and rudderless stone boat through the Mediterranean and up the Atlantic coast to Iria Flavia (now part of the town of Padrón) on the Galician shores. All this apparently in a week!

The source of this legend, with its several variants***, is lost in the mists of time and we hear nothing about the location of St. James’s relics until approximately 818-840/2 when his tomb was miraculously discovered by a shepherd (or hermit ) named Pelayo who was led there by twinkling stars.

[***One variant has it that St. James was buried in Mérida (Extremadura), a town he had supposedly visited before arriving in Galicia as part of his evangelical work. How his remains ended up in Mérida is a mystery, but it is speculated that they would have been transferred to Santiago for safe keeping following the arrival of the Moors in 711.]

The discovery was conveyed to a certain Theodomir, Bishop of Iria Flavia (818-847). Another version attributes the discovery to Bishop Theodomir who was guided there by a star. In both instances, Theodomir then reported the finding to Alfonso II, King of Asturias (r. 791-842) who quickly visited the site and had a small church built there. Alfonso’s actions gave royal approval thereby to Theodomir’s claim for the legitimacy of the Saint’s tomb.

But on what was Theodomir’s claim based? There was nothing concrete, although the famous Asturian theologian and monk, Beatus of Liébana (c. 738-c.800) had confirmed in his widely disseminated Commentary on the Book of Revelation (c. 776) that Santiago had converted Spain to Christianity. [Liébana was then located in the Kingdom of Asturias, but now it is geographically situated in neighbouring Cantabria].

Significantly, Beatus’s assertion came some 65 years after one of the most momentous events in Spanish history: the invasion of the Peninsula in 711 by Muslim forces (made up of Berber soldiers under Arab leadership) from North Africa.

At the time of their arrival, the Peninsula was controlled by the Visigoths who, in 589, had declared Christianity the official faith of their kingdom. Political turbulence and civil war among the Visigoths in 710 allowed the Muslims (or Moors, the general term for the newcomers regardless of ethnic origins) to slip across the Straits of Gibraltar in 711.

Between 711 and 720, the Moors conquered all of Iberia/Hispania, including Galicia. A significant exception, however, was a narrow strip along the mountainous north coast, roughly modern Asturias and Cantabria.  It was from here that armed resistance against the Moors started.

The first successful Christian resistance to the Moors is usually identified as the Battle of Covadonga, fought in a remote valley of the Cantabrian Mountain area of Asturias, sometime between 718 and 725. Amongst those Christians were fugitives from al-Andalus (as the Moors called the land they occupied) who carried with them their Christian Visigothic heritage. It was a heritage that played increasing importance in the reconquest of those lands lost to the Moors as successive kings laid claim to be heirs to the Visigothic tradition and linked their reigns to the dreamed-of return to the unity of the Peninsula under the Visigoths.

Precipitous mountains, steep valleys and a wet climate were sufficient disincentives to the Moors and allowed the kingdom of Asturias to entrench itself safely in the rugged terrain by around 810, when Alfonso II made Oviedo his capital. Nevertheless, regular raids from the Moors were a constant reminder of the “Other” and of the loss of territory to an alien culture.

Significance.
The claim that the tomb discovered between 818 and 840/2 was that of St. James would, then, have resonated in both the religious and political circles and would have had special impact being found so near at hand. It meant that Christians could now call on the Apostle for divine assistance to counter the Moorish use of relics of the prophet Muhammad that they carried into battle. And Asturias could be seen at the vanguard of the Christian fight against the Moors. In other words, both worlds would benefit and be inspired by having a powerful figurehead to lead them in their struggles with the Moors.

But again, going back to the same nagging question … how do we know they were the bones of the Saint martyred in Jerusalem? We still don’t, but two factors may help to account for the popular belief that they were those of St. James. First, the tradition that St. James had preached the gospel of Christ in Spain, a “fact” confirmed by respected authorities such as Beatus of Liébana. Second, the active involvement of Bishop Theodimir and Alfonso II in propagating the news of the discovery and verifying the bones as those of James. [In the 1940s an ancient Roman burial site was found beneath Santiago cathedral, which Bishop Theodomir could have used to his (or the Church’s) advantage in making his claim that St. James’s bones rested there. Furthermore, the burial site contained a decapitated skeleton, a detail which coincides with the legend of the transportation of St. James’s remains to Spain. Also found there was the tomb of Bishop Theodimir, the man who verified the presence of St. James’s remains!

Incidentally, the traditional understanding of “Compostela” is that it derives from the Latin “campus stellae” or “field of stars.”  It’s a poetic image but the word may in fact stem from “campus stelae” a “field of (grave)stones” or simply be a diminutive of the Latin “compostum” meaning “little cemetery.”]

The cult of St. James, then, stems primarily from the words and actions of two authoritative and influential individuals, one ecclesiastical/ religious, the other royalty/ secular: Bishop Theodimir and King Alfonso II of Asturias. As a theologian, Theodimir would have a good knowledge of the lives of saints and of James’s supposed evangelization of Iberia/Hispania. Furthermore, he would have recognized the advantages for him and the Church of authenticating the bones found in Santiago as those of St. James, one of Christ’s “beloved” disciples.

For Alonso, aligning himself with such a discovery would not only add status/ prestige to Asturias, but also help confirm Asturian sovereignty over Galicia, which had been retaken from the Moors by Alfonso I in the 740s. This is a significant detail because Galicia was at this time the first and only part of the Peninsula that Christians had reconquered from Muslim control. Although Alfonso I continued south, crossing the Duero and reaching as far Salamanca, Avila and Segovia, he did not retain those lands. He withdrew north, leaving a large area of the Duero basin relatively depopulated. Still, the reconquest of Galicia was an example of what could be achieved given the right incentives and determination.

So now, importantly for both the Church and Asturias, the relics of St. James could be harnessed to counter the ongoing and threatening presence of a common enemy: Muslim al-Andalus.

Post Note.
In the case of Bishop Theodomir, there may have been added purpose in confirming that the discovered bones were those of St. James. Theodomir would undoubtedly be very aware of the thriving devotion in Galicia to another martyr, the 4th-century Bishop of Avila, Priscillian (c. 340-385/6) who was beheaded by the Church for heresy. Priscillian was born in Spain, but his birthplace is disputed, some arguing for Roman Baetica (modern Andalusia and southern Extremadura), others for Galicia.

A committed ascetic, Priscillian advocated the reform of the church which brought him into conflict over ecclesiastical control with the more numerous non-reformists of the established hierarchy, a conflict which eventually led to his execution. Furthermore, he espoused ideas that drew on more esoteric sources, principally Gnosticism and Manicheanism, whose belief in the existence of two kingdoms (light and darkness or good and evil), challenged the established Christian narrative. His execution was viewed by his followers as martyrdom and martyrs merited devotion.

Our interest here is not in Priscillianism but in the fact that it flourished in Galicia and that for Bishop Theodomir, it must have represented a challenge to the orthodoxy of Catholic dogma. What better way, then, to counteract Priscillianism than to trump a 4th-century “heretic martyr” by an authentic martyr who was not only Christianity’s first martyr but also one of Christ’s closest disciples!

History shows us that the cause of St. James prevailed thanks to the symbiotic relationship between Church and State (Asturias, which in 910 morphed into León after the capital moved south from Oviedo to the city of León). It wasn’t long before St. James was co-opted by the State as an active, military defender of Christianity against Islam, appearing miraculously on horseback in battles. Not only did he earn the title of Santiago Matamoros (Moor Killer), but he was also riding forward to become Spain’s*** national saint. (***Catalan separatists might object to this broad characterisation and remind readers that Catalonia-Catalunya has its own national saint, St. George- Sant Jordi).