Spanish Travel. Objectives and Itineraries.
Information about travel in Spain falls into different general categories.  There is travel literature, spanning several centuries up to present day, in which individuals write about their experiences traveling in Spain.  There are travel guides, either general or thematic, which highlight what there is to see and do when you travel in Spain. And very popular nowadays are accounts (blogs) of their daily experiences by people who have settled in Spain permanently or for extended periods.

Our pages on travel in Spain will be a mixture of these categories. We have spent extended periods and traveled widely in Spain, and our observations will reflect our experiences, our preferences and our enthusiasm about the country.

We’ll begin with several pages on Spain’s costas (coasts), mountains,
Meseta (Spain’s large central plateau) and rivers to give you a general sense of Spain’s geography. Traveling, especially virtual travel is always easier with maps, so we’ll include maps to help you on your way in Spain. The following is a general map of the country: 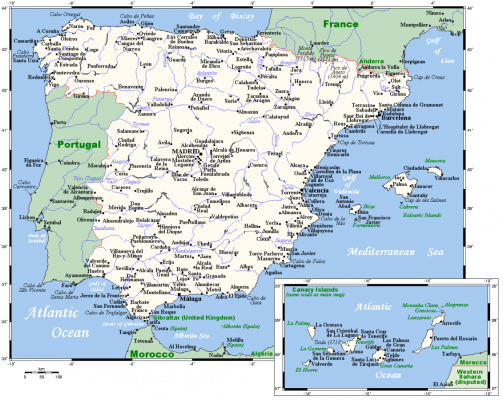 We’ll also suggest itineraries if your schedule only allows a limited time for travel in Spain.  For example, two or more cities such as Córdoba, Granada and Sevilla, or Avila, Segovia and Salamanca, which can be comfortably visited in a few days?  We’ll provide itineraries for those who, like us, love to wander off the beaten track into the countryside and villages of Spain.

There will also be itineraries based in and around a single city such as Toledo.  We will also look for possible routes for those who have 2 or 3 weeks to travel in Spain. (e. g. we’ve added an itinerary of a three-week trip we took in 2013.)

Source of the map above: http://en.wikipedia.org/wiki/File:SpainOMC.png