Gothic architecture first appeared in northern France in the mid 12th century and lasted some 400 years. As with any style that lasted that long and across a wide area there was no complete uniformity.

There was early Gothic (approx. 1120-1200), high Gothic (1200-1280 aka Rayonnant), and flamboyant Gothic (1280-1500), all represented in English, French, German, Italian, Spanish Gothic and so on. Gothic architecture admitted different kinds of buildings (e. g. palaces, castles, hospices, town, guild halls), but none elicit more admiration than the great cathedrals of that period.

Spain’s major Gothic cathedrals were built between the 13th and 15th centuries, with most located in the northern half of the Peninsula. A couple of impressive latecomers of the early 16th century are the New Cathedral of Salamanca 1513  and the Cathedral of Segovia 1525.

Burgos was soon followed by Toledo (1227), and León (1258).  These three, together with Seville’s majestic 15th-century cathedral, are the “big” four, offering an excellent cross section of different styles of French/ international Gothic cathedrals.

But their construction was also significant in relation to the historical role of each city in Christian Spain’s gradual repossession of land from the control of Muslim al-Andalus.

**Not to be overlooked, but more appropriate for a
separate page, are the fine Gothic cathedrals of
Catalonia: Barcelona (1298), Girona/Gerona (1312),
and the Cathedral of Palma de Mallorca (1229).]

It is this historical aspect rather than their architectural qualities or artistic content that we will address in this page.**

The rapid succession with which Burgos, Toledo and León were built suggests there was enthusiastic support for such building in the 13th century. Gothic had taken off in France following the construction of the Abbey of St Denis in Paris around 1140, and its popularity followed a natural route through the Pyrenees into the north of Spain, similar to that of Romanesque architecture about 150 years earlier.

Unlike Romanesque (and Cistercian) architecture, however, which spread from rural monastic orders, Gothic churches were the fruit of urban interests.  Promoted by bishops, royalty and the city fathers of growing towns, their construction involved the entire urban population –merchants, townsmen, peasants (Ken Follett’s novel, Pillars of the Earth, gives a good idea of what was involved in building a cathedral).

In the case of both Burgos and Toledo, their respective bishops had studied in France and were  ardent supporters of the new style. Royal support came from Ferdinand/ Fernando III, King of Castile-León who attended the laying of the first stone of both cathedrals.

Papal support came from indulgences (forgiveness of sins) which were granted to those contributing funds for the construction. León enjoyed similar papal privileges as Burgos and Toledo, and Ferdinand’s son, Alfonso X, contributed personally to the building.

The structural similarity between the three cathedrals and cathedrals in France points to the involvement of French master masons, who functioned both as architects (the word “architect” was generally reserved for God, as creator of the universe) and builders.

This is clearly so for the Cathedrals of Burgos and Toledo, according to their official websites. No such unequivocal reference to French engagement is made for León’s cathedral, although parallels drawn between it and the Cathedrals of R(h)eims and Chartres leave little doubt that the architect was well acquainted with French Gothic style. 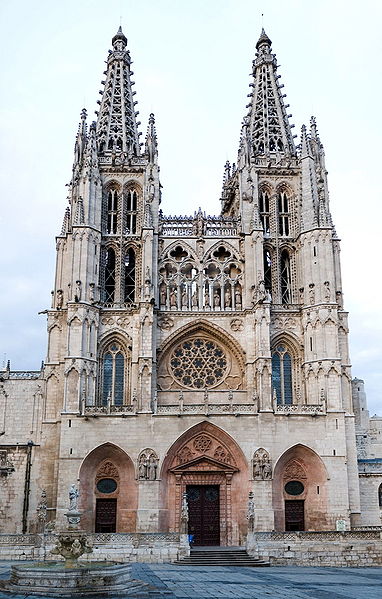 The enthusiasm of the respective bishops of Burgos, Toledo and León for Gothic architecture and the support by royalty and papacy were further inspired by the historical importance of these cities.

Both Burgos and León were major stopovers for the many pilgrims heading to Santiago de Compostela. It would be appropriate to raise a church to the glory of God commensurate with the importance of the pilgrimage (the third most important in Christendom, after Jerusalem and Rome).

The heaven-reaching Gothic style fitted the bill perfectly. But Burgos and León were also significant because they were deeply associated with Spain’s Christian culture and political heritage. León had been capital of the kingdom of the same name and early heir to the Visigothic tradition, and Burgos was capital of the joint kingdoms of León-Castile, and a major residence of Fernando III and his son, Alfonso X.

For Toledo, the construction of its cathedral celebrated the victory of the battle of Navas de Tolosa (1212) over Muslim forces. Rodrigo Jiménez de Rada, Archbishop of Toledo, had urged the pope to declare the battle a crusade and had played an active role in recruiting kings and prelates for the cause.

For the city, the cathedral was the most prominent way of signalling its return to former glory when it was capital of Visigothic Spain. Furthermore, it was built on the site of the former great mosque. In these three cities, the building of these major Gothic churches was a confirmation of their ecclesiastical and royal status and at the same time a sign self-confidence.

Nothing as spectacular as the cathedrals of Burgos, Toledo or León was again attempted until 1401 when the parish chapter of the former mosque of Seville, then used as a church, decided to build a church “so beautiful and magnificent that people who see it when completed will consider us mad.” The end product was the largest Gothic church in the world, a record it still holds!

But why the decision to build a cathedral, and a large one at that, after such a long gap? There was a practical reason: the mosque was reportedly in a state of disrepair after an earthquake in 1356.

But equally important probably was the matter of status.  Seville was both a royal residence and favourite city of successive Castilian kings (Ferdinand III, Alfonso X and especially of Pedro el Cruel (Peter the Cruel, ruled 1350-69). And before its conquest by Ferdinand III in 1248, it had also been, together with Marrakesch (Morocco), the capital of the Almohad empire, and before that the capital of the most important taifa kingdom of al-Andalus.

It was, then, a city with a regal/ majestic ancestry underlined by the sumptuous Moorish palace complex (the Reales Alcázares) erected by Peter the Cruel in the 1360s that rivalled the Alhambra of Granada. Such magnificence demanded a church equal to the city’s regal pedigree, a goal that was facilitated by the fact that by the end of the 14th century, Seville had become an important and wealthy commercial and trading centre.

Finally, the massive cathedral was a major statement of Christian presence, power and self-assurance when the frontier with the remaining piece of Muslim al-Andalus, the taifa of Granada, was not far away. 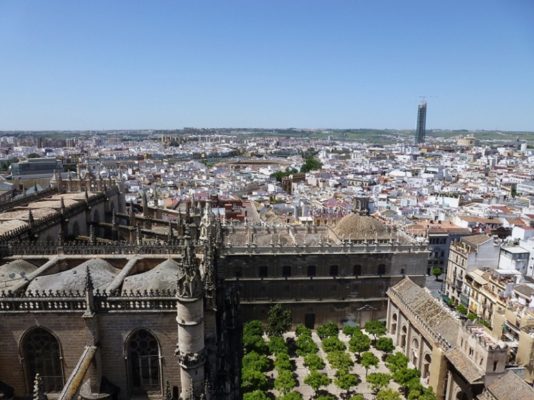 The construction of the cathedrals of Burgos, Toledo, León and Seville reflected their historical significance, and their soaring grandeur confirmed the greatness of the cities they graced. Regal, majestic and with a touch of the mystical, the cathedrals were built, undoubtedly, to the greater glory of God but at the same time they were an expression of human pride and achievement.

That they have endured so long and still impress us is a testament to the workmanship of the builders and the vision and determination of those who inspired their construction.