Introduction.
For about 600 years, the Iberian Peninsula was controlled by the Romans who valued the peninsula (or Hispania as they called it) as a source of food e.g. wheat, olive oil, wine. Given the close relationship between Hispania and Rome, it’s understandable that much of the food consumed by Hispano-Romans was similar to that of Rome.

When the Empire collapsed in the 5th century AD, Hispania was taken over by the Visigoths, a Germanic tribe already “Romanised” from long contact with Rome. Predictably, they ate many of the same foods already consumed by the Romans and Hispano-Romans.

** We mention this early distinction between butter
and olive oil because it weaves its way into Spanish
history. See The Tyranny of Food, where food in the
16th century becamea significant means of determining
the religiousaffiliation of Conversos and Moriscos
(converted Jewsand Muslims) in a Christian country.

One notable difference** that reflected their nomadic background and their preference for livestock farming over arable farming was their practice of cooking with lard instead of olive oil.

The Moors Arrive.
The fate of the Iberian Peninsula took a radical turn in 711 when Muslim forces from North Africa crossed the straits of Gibraltar and quickly overcame Visigothic opposition. By 720, the Moors (the term generally applied to the invading newcomers regardless of ethnic background), controlled almost all the peninsula. But al-Andalus, as they called the land they occupied, was gradually reduced in the face of advancing Christian kingdoms until by the 13th century all that was left was an area roughly equivalent to modern Andalusia. In 1492 that too fell, and al-Andalus was no more.

However, the Moors left a lasting cultural legacy which includes agriculture and gastronomy. For centuries, the Moors developed the land with great skill and converted al-Andalus into one of the wealthiest countries of the Mediterranean.

Agriculture: Irrigation.
The prosperity of al-Andalus was the product of a healthy combination of commerce, industry and agriculture. Indeed, agriculture was fundamental to al-Andalus’s wealth.

Vital to the development of the land was irrigation, which fed gardens and converted arid areas into green oases. Most of the transformation occurred in what is now Andalusia, Southern Extremadura and Castile-La Mancha, and continued up the east coast via Catalonia to the Ebro valley and then inland to Aragón.

Contrary to popular belief, the Moors did not introduce irrigation to the peninsula, but what they did do was improve and expand significantly on what the Romans had started. Roman irrigation in Hispania had been primarily based on gravity which limited the amount of land that could be irrigated. The Moors, borrowing from Middle Eastern technology, were accomplished practitioners of the water mill (aceña), underground channels (qanats), and the water-wheel (noria) which could raise water from wells or rivers and so expand the terrain available for cultivation.

Dotted around the landscape of southern Spain, we can still see these Moorish water-wheels, their buc 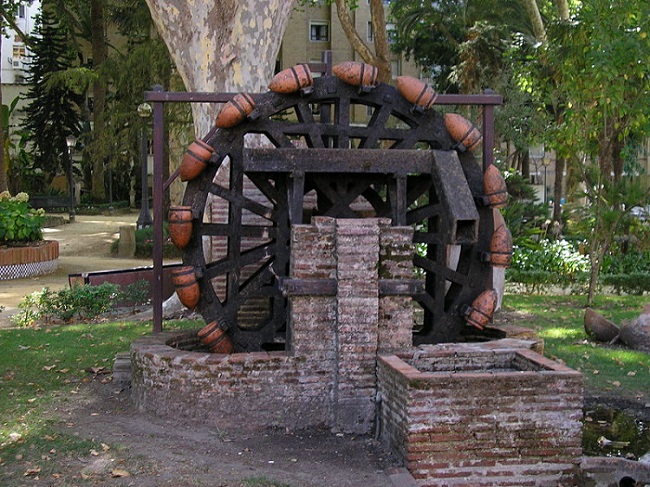 kets extracting water from a lower level to deposit into channels along which it is then carried to the outer fields. But the best places to see the Moorish legacy still “in action” today are the highly irrigated and lush areas around Valencia and Murcia, each known simply as the La huerta (garden).

Interestingly, in Valencia, the system of water distribution is still regulated by a body of eight “peasant” judges called the Tribunal of the Waters.

Any farmer with a grievance can appeal to the Tribunal which meets every Thursday at noon under the Door of the Apostles of Valencia’s cathedral. The Tribunal has met since at least the 10th century, but no minutes are kept, and all decisions are rapidly made and final. The reason for the speed in reaching decisions is succinctly described by the English traveller, Richard Ford, who visited the area in the 1830s: There must be no laws delay, for water here gives daily bread and if the suit went into … Chancery, land and cultivators would be ruined; time accordingly is saved by prohibiting the use of pen, ink and paper… Handbook 431.

The Science of Agriculture.
Irrigation was just one aspect of the Moors’ attention to agriculture.  The inspiration for the importance of agriculture was Baghdad, capital of the Abbasid caliphate in the Middle East. Together with its neighbouring city Samarra, Baghdad enjoyed a cultural and commercial golden age from the 8th to the 11th centuries.

During this period, the court and nobility attached great importance to learning and adopted refined and elegant manners that embraced music, poetry, art and architecture etc.  Fine dining was considered a prestigious and necessary complement to this gracious life-style. Predictably, then, the cultivation of foodstuff received a lot of attention. As a result, books were written on agricultural practices as well as many cookbooks, and books on diets and medicine.

Influenced by what was taking place in the Middle East, the Andalusis (i.e. those living in al-Andalus) developed a highly efficient agricultural infrastructure based on observations of local conditions. They took a scientific approach and their observations were recorded as guides for farmers. For example, in the 11th -century, an agriculturist from Toledo, Ibn Bassal, wrote a treatise entitled Kitab al-Filahah (Book of Agriculture) in which he discussed the importance of irrigation, the art of cultivation, how to till the soil and how to control pests. In addition, he explained how to grow different kinds of food and how to preserve them.

The best known work is by the 12th-century agronomist and horticulturist from Seville, Abu Zacaria (or Abu Zakariya ibn al-Awwam al-Ishbili d.1185) who published an extensive, wide-ranging compilation of earlier works from classical, Middle Eastern and Andalusi writers. Also called Kitab al-Filahah (Book of Agriculture), the book included discussions on irrigation, different kinds of soils, the choice of seeds, the use of manures, the qualities of edible plants and vegetables, the art of plant grafting and pruning, and how to preserve fruits.

Attention was paid to the organisation of a garden and to which plants to grow in it. There were chapters, too, on livestock: how to raise cattle and poultry, the relationship of animals to the land, the diseases that affected animals, fowl, bees etc., and how to cure them.

The importance attached to agriculture as a science is what made al-Andalus the envy of the Mediterranean.  The results were clear; improved irrigation and fertilisation allowed for longer growing seasons, reduced dependence on the unpredictability of weather and increased potential for a wider array of crops.

Other fruits and vegetables, already known to the Hispano-Romans, and widely used by the Moors, included almonds, figs, dates, pomegranates, grapes, quince and melons (all of which, incidentally, come from Latin words).

Soft wheat, the basic ingredient of bread and widely grown by the Romans, was now joined by hard (durum) wheat brought by the Moors. Durum wheat has a particular advantage in that grows well in arid regions and when dried lasts indefinitely. It has, as we say nowadays, a long shelf life, and is the main component of pasta.

Spices were widely used in Andalusi gastronomy, although the Latin origin of the Spanish names of many suggests that they were already known in Roman Spain (i.e. Hispania). However, the Visigoths, successors to the Romans in the peninsula, were less sophisticated than their predecessors and their cuisine was relatively rudimentary. According to one scholar (Llopis 77), they were partial to pepper, cinnamon, saffron and ginger, spices that also feature in Andalusi cooking but now used more imaginatively and intensely. Other spices very popular with the Andalusis were cumin, coriander/cilantro, cardamom, mustard, nutmeg, cloves, and aniseed.

The Impact of Improved Agriculture.
The impact of improved irrigation and a scientific approach to agriculture together with the introduction of wide variety of new products benefitted the diet, health and well-being of Andalusis.  As a result, cities grew and prospered, taxes were light and, as Ibn Hawkal, a 10th-century traveller from Arabia, observed “the means of acquiring wealth are common to all classes of the population” (Fletcher 18).

Prosperity and well-being in turn were conducive to study and to leisure activities (e.g. to play chess, introduced into al-Andalus in the 10th century, or to create beautiful, aromatic gardens as sources of aesthetic pleasure or meditation).

In the 10th century, Córdoba – with a population of approximately 100.000– was the largest city in Europe, the “ornament of the world” according to a Christian nun from Lower Saxony (Menocal 12). Culture flourished and learning was highly esteemed. The city was a sophisticated magnate attracting people from Europe and all corners of the Mediterranean. Its scholars were recognised as leaders in algebra (an Arabic word), astronomy, medicine, botany, geography, history etc., and their impact on European life in the Middle Ages was profound.

The prosperity of al-Andalus drew praise from visitors and residents alike and even inspired poets. Ibn Hawkal observed that “the land is well irrigated, either by rain … or by canals of which there is a superb network, extremely well looked after” (Fletcher 18).

The 10th-century Jewish physician and adviser to Abd al-Rahman III (ruled 910-961), Hasdai ibn Shaprut, wrote enthusiastically: “The land is rich, abounding in rivers, springs, aqueducts; a land of corn, oil and wine, of fruits and all manner of delicacies; it has pleasure gardens and orchards, fruitful trees of every kind, including the leaves of the trees upon which the silkworm feeds…. There are also found among us mountains … with veins of sulphur, porphyry, marble and crystal. Merchants congregate in it and traffickers from the ends of the earth … bringing spices, precious stones, splendid wares for kings and princes…. “(Gerber 31).

Conclusion.
But let’s leave the last words to the poets who found inspiration for their imaginative world in fruits and vegetables that do not normally have poetic resonance: e.g. eggplants, artichokes, walnuts, radishes, cornfields, quinces, orange trees.

Ibn Sara from Santarem (d. 1123) celebrated the humble eggplant as follows:  “A rounded product, delightful to taste, it is fed by gushing water in gardens everywhere. And, encircled by its sepals, it is like a lamb’s heart, caught in the claws of an eagle.” Translated from Poemas arabigoandaluces p. 90.

An artichoke is seen by Ibn al-Talla (Granada, 11th century) as “Daughter of water and earth enclosed in a castle of avarice, she yields her abundance to whomever awaits her. She seems, by her whiteness and by her inaccessible sanctuary, to be a Greek virgin hidden by a veil of spears.” Translated from Poemas arabigoandaluces p. 84. Amazing what food can inspire!