After a late lunch, we headed for the Royal Chapel. Passing through the gateway leading to the Chapel, we were approached by a couple of Roma women trying to sell us some sprigs of herbs or wilted carnations with promises of future good luck etc. Don’t let then shove anything into your hand or they’ll demand payment and can be quite persistent. There were fewer of them than I remember from previous visits, but they do add a colourful and exotic air to the place.

The Royal Chapel is tucked into the elbow of the Cathedral and its sacristy. It was built as a mausoleum for the Catholic Monarchs, Ferdinand and Isabella, and replaced the Monastery Church of San Juan de los Reyes in Toledo, where they had earlier intended to be buried. The change of heart occurred after the conquest of Granada (1492), which they thought represented their greatest triumph. Isabella died in November 1504, two years before work began on the building of the Chapel. Both she and Ferdinand (died 1516) were interred provisionally in the Convent Church of San Francisco in the Alhambra, now one of Spain’s most “in demand” paradors, (state-run hotels).

Construction of the Royal Chapel was completed by 1521. Late Gothic in design, it is notable for its plateresque ornamentation, a light, filigree decoration and synthesis of what is called flamboyant Gothic from Northern Europe and the delicate architectural tracery and stylised silverwork by Moorish artisans. Plateresque was particularly popular during the early years of the 16th century, and is frequently called Isabelline, a tribute to the enormous influence of the queen during this period. The best examples here are to be seen in the entrance from the cathedral, and in the beautiful ribbed ceiling of the chapel itself. (Incidentally, one of the most outstanding examples of plateresque/ Isabelline ornamentation in Spain is the church of San Juan de los Reyes in Toledo).

Considering that it is a mausoleum built to house the remains of Spain’s most famous monarchs, the Royal Chapel is modestly sized, in keeping with Isabella’s wishes.  She also wanted the interior to be unassuming, but thanks to her grandson, Charles/ Carlos V, and others the Chapel was enriched by several works of art: e.g. the beautifully elaborate wrought-iron screen separating the nave from the chancel (where Ferdinand and Isabella lie), the Renaissance altar adorned with plateresque decoration (stylised leaves and fruit, including pomegranates representing Granada and church unity Royal Chapel), the wonderfully sculptured royal monuments in white Carrara marble.

The tomb of the Catholic Monarchs is an important attraction for all visitors.  The most powerful rulers of their day and arguably founders of modern Spain, they have a privileged role of the history of the country. (Nowadays, there is resistance to this idea, especially from autonomous communities such as Catalonia and Euskadi –Basque Country– who associate the Catholic Monarchs with Castilian centralism. In addition, the symbols of yoke and arrows on their shield–which you can see in several places in the Chapel– were adopted by the 20th-century dictator, General Franco, and the Falange, the political arm of Francoism)

I was surprised when I first visited the Royal Chapel years ago to find two monuments above the resting place of Ferdinand and Isabella. Besides the one dedicated to the Monarchs themselves, there is another to their daughter, Juana la Loca (Joan the Mad, died 1555) and her husband, Felipe I, el Hermoso (Philip the Handsome, died 1506), parents of Charles V.  Juana and Felipe are interred below, alongside Ferdinand and Isabel. 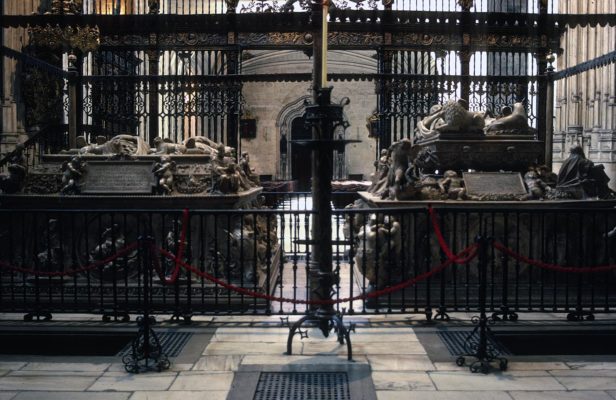 The picture shows the tombs looking from the high altar. The monument to Ferdinand and Isabel is to the left. It is also lower than that of Juana and Felipe, something that has always puzzled me given that Juana and Felipe scarcely figure as political heavyweights in Spain’s history (Felipe was a Hapsburg from the Netherlands and died almost as soon as he set foot in Spain). The craftsmanship on both tombs –done by different sculptors—is impressive, although the accompanying smaller sculpted figures and decoration, especially on Juana and Felipe’s monument, seem to me to be a distraction from the royal figures themselves.

No such distraction when you descend the steps to the crypt. There are actually five coffins there, the fifth –much smaller—being that of Prince Michael, grandson of Ferdinand and Isabella. Two things have always struck me, looking at the leaden sarcophagi … how plain and how small they are. When Charles V saw the vault for the first time, he is reported to have said: “small room for such great glory.” Ferdinand and Isabella are in the middle, but only a small crown and sceptre beneath the cross on the wall behind them identify them as royalty.

Back up the steps you face the high altar (1520-22), dedicated to John the Baptist and John the Evangelist with scenes from their lives and their martyrdom. Violent scenes abound: the gory beheading of John the Baptist, John the Evangelist being shoved into a cauldron of hot oil (from which he escaped miraculously and lived to old age, apparently … no one really knows), St James, patron saint of Spain (and popularly known as Santiago Matamoros: Slayer of Moors) on horseback, trampling the decapitated heads of some unfortunate Moors.

Spaniards are no more addicted to violence than other people, but they are less squeamish about it. The whole tone of the high altar fits in with the ethos of the time: Christian triumphalism, Christian martyrdom and Moorish defeat and subjugation.

Along the lower level of the altar are depictions of the fall of the city of Granada and the handing over of the keys by Boabdil, last ruler of the kingdom, to Ferdinand and Isabella.

Gilded and polychromed (i.e. multi-coloured), with multiple frames containing plateresque decoration and numerous characters conversing, weeping, gesticulating … the activity contained in the high altar is a lot to take in; its business is overwhelming to put it mildly.

I was glad to escape to the relative tranquility of the sacristy/museum.  This is a small treasure trove of articles belonging to the Catholic Monarchs: Isabella’s sceptre and crown (with pomegranates worked into the design), her mirror (now part of a monstrance, a vessel containing the consecrated Eucharist, the bread that is the body of Christ for Catholics), embroideries worked by her hand, her jewelry box, Ferdinand’s sword, banners used at the conquest of Granada.

Hanging on the walls are several Flemish paintings collected by Isabella, a reflection of her taste and the popularity of Flemish artists and artisans in Spain during this period (the Royal Chapel was in fact designed by the architect, Enrique Egas, of Flemish parentage). Still, for me, the most moving object was the brilliantly illuminated missal written for the Queen. The colours are still vivid after all these years, and I could imagine the devout Isabella contemplating the same page that I was looking at, and the centuries that separated us seemed for a moment to evaporate.

It was time to take a break so we gave the cathedral a miss, contenting ourselves with the imposing classical triumphal arches of its façade.

The whole front radiates power, strength and invincibility. It’s not surprising that the change from the original design of a Gothic church to a Renaissance one coincided with the visit of Charles V to Granada in 1526 and the change of architect from Enrique Egas to the Italian-trained Diego de Siloe.  Charles, by then the Holy Roman Emperor, intended the Cathedral of Granada to be the royal pantheon, and such high ambition required a building of appropriate imperial dimensions.  This is, remember, the same Charles who commissioned the imperial Palace within the Alhambra.

After our break, we headed on foot for the Plaza San Nicolás in the upper part of the Albaicín, remembering our nightmarish meanderings in our van as we looked for a way to get to our hotel the day before (See Travel. Day 4).

The Plaza San Nicolás is a wonderful place —the place– to get an overall view of the Alhambra, with the snow-covered Sierra Nevada rising dramatically behind it. And the early evening is the best time, with the setting sun casting a golden glow to the reddish stone of the Alhambra buildings.  As we walked, it was for me a time of memories, of the number of times Margaret and I had taken pleasant evening strolls through the narrow streets of this old Moorish quarter when we spent a year in Granada. For old time’s sake, we passed along Calle Zenete, paused outside the house we lived in (yes, I had my photo taken!) and then it was up to San Nicolás. The view was, as always, magnificent, and the square –as always– busy.

There was one big change from our last visit to this spot: a new mosque had been built.  After overcoming a lot of local opposition, it was opened on July 10, 2003, becoming the first mosque to be built in Granada in over 500 years. We walked through the garden, briefly patted the resident cat and then headed back to our hotel.

On the way back through the Plaza San Nicolás, we stopped for delicious freshly squeezed lemon and orange juice. Just what we needed after a long hot day!

John: After spending much of the day in the Alhambra grounds, I really enjoyed going to the Plaza San Nicolás in order to look over at the Palace with the Sierra Nevada in the background. We went in the evening and the sunlight worked well for photos. If it is too busy there, you can also get a great view of the Alhambra from the garden of the Mosque which is right beside the Plaza San Nicolás. Having walked up through the Albaicín, we were hot and thirsty and there was a small concession stand there that sold awesome freshly squeezed orange and lemon juice.

On the way down, I noticed signs hanging from the upper balconies of some houses: desahucios no! (evictions, no). They were a reminder of the grim economic conditions Spain is undergoing as banks foreclose homes and eject the owners. This is the other face of Spain that not all tourists are aware of, because tourist attractions are not usually in residential areas.  However, with unemployment at over 25% and over 50% for those between 18 and 25, it’s not surprising that there is strong opposition to banking practices, and large demonstrations have been organised throughout the country. If you are interested in the situation in Granada, you can read http://observers.france24.com/content/20130816-spanish-banks-back-down-protesters-fighting-homes

Since taking photos inside the Royal Chapel is prohibited, all the inside photos shown above are from the sources below.
Photo of Ferdinand and Isabella’s monument, courtesy of Casselman: http://uwdc.library.wisc.edu/collections/Arts/CasselmanImage  Click on Gothic
Photo of high altar, courtesy of Tripadviser: http://media-cdn.tripadvisor.com/media/photo-s/02/a5/e9/65/filename-dscf1074-jpg.jpg
Photo of Isabel’s crown and Ferdinand’s sword, courtesy of Tripadviser: http://media-cdn.tripadvisor.com/media/photo-s/02/63/2d/38/ferdinand-s-sword-isabella.jpg
Photo of facade of Granada Cathedral Antonio Peramo on Wikipedia http://www.gotik-romanik.de/Granada,%20Thumbnails/Photo%20by%20Antonio%20Peramo%20on%20Wikipedia.html

June 23, 2020. Visiting Granada? The following is very helpful and up to date: https://www.theguardian.com/travel/2018/dec/10/locals-guide-granada-spain-alhambra-tapas-flamenco-street-art