Velázquez and Classical Mythology. The Rokeby Venus.
By and large, Spanish painters of the Golden Age (approx. 1500-1680) were not drawn to classical mythological topics, although there was –paradoxically– no shortage of mythological works in the country owing to the large collections owned by many wealthy Spaniards (notably the royal collection). However, these paintings were almost exclusively made by Italian artists whose prestige made them acceptable to the affluent purchasers. A notable exception was the Flemish artist and diplomat, Peter Paul Rubens (1577-1640), a favourite of Philip IV.

Native Spanish painters, then, faced formidable competition from their European rivals/ contemporaries.  In addition, mythology frequently encompassed male and female nudity and opposition by a very conservative Spanish Catholic was undoubtedly a formidable deterrent, not to mention the activities of the Spanish Inquisition, always awake to the possibility of heresy. As a result, there was limited scope for native Spanish painters, apart from portraits and –later—still life. 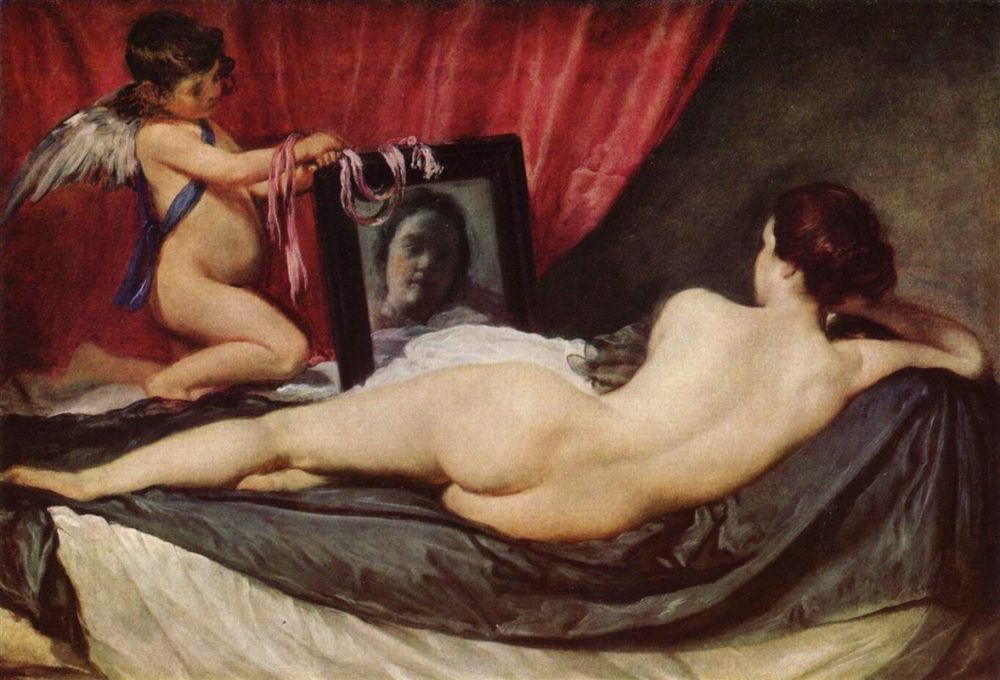 Nevertheless, one of the most voluptuous female nudes in all of art is Velázquez ’s mythological Venus and Cupid (1644-48) also known as the Toilet of Venus, Venus at her Mirror, and The Rokeby Venus (after the name of the country house in Yorkshire, England where it hung from 1813 to 1906 when it passed to the National Gallery, London, where it still hangs). It was Velázquez ’s only female nude, and probably tolerated 1. because of Velázquez ’s esteemed status at court; 2. it was intended for a private collection (the aristocratic womanizer, the Marquis of Carpio, Gaspar Méndez de Haro); 3. it was possibly painted in Rome, a more liberal city than Madrid (the general consensus is against this); and 4. she is seen only from behind; this was daring enough, and a full frontal female nude would have been especially audacious in conservative Spain, even for Velázquez .

Although there were plenty examples of frontal female Venuses emanating from Italy, Velázquez ’s Venus is one of the most captivatingly alluring/seductive. 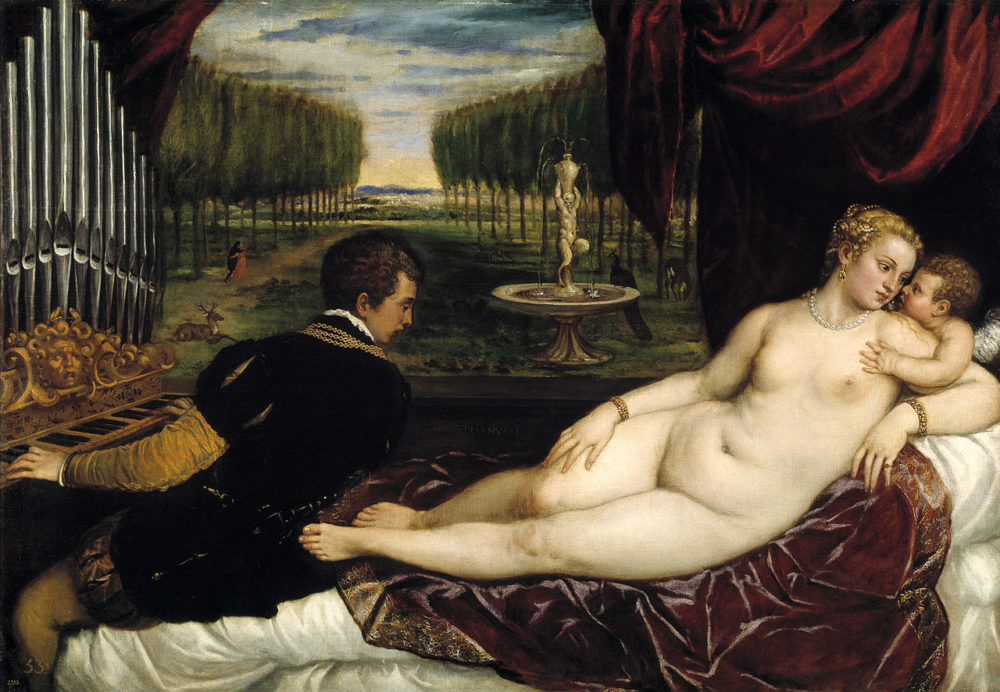 Compare, for example, Titian’s, Venus and Cupid with an Organist or Venus and Music (1545-48. This is the second of two versions at the Prado Museum in Madrid.), where there is a strong element of lust or blatant sexuality as the organist stares boldly at Venus’s genitalia.

The languid, suggestive pose of Velázquez ’s Venus, her white body –with hips and bottom resting prominently in the foreground on a satiny dark bedsheet– and the velvety red background drapery make for a sensual, erotically charged picture. Only the nude and boyish Cupid -holding the mirror—witnesses this intimate moment of self-absorption as Venus gazes at herself in the mirror.

Nevertheless, looked at closely, the face reflected in the mirror is a disappointment: Venus seems very plain. Her lips are somewhat thick, her nose somewhat broad, and her eyebrows rather heavy/bushy. Her hair, too, appears less well combed compared with the view from the back, with some whisps hanging from the side. In other words, the face does not live up to what is suggested by her voluptuous outline from the back. The immediacy of the body with its sensual curves lead us to suppose a beautiful woman, but the plainness reflected in the mirror suggests, otherwise.

From this perspective, the picture is a visual rendering of a favourite topic of the Baroque: the deceptiveness of appearances which leads to disillusion and also, in this case, the demythification of classical mythological figure. Venus, the goddess of Love and personification of female beauty, is not so beautiful after all. She is just an ordinary looking, young brunette, a mortal rather than the golden-haired goddess favoured by Renaissance artists.

Velázquez  never used mirrors (or mirror equivalents, e. g. a painting within a painting, as for example Christ in the House of Martha and Mary) for mere decoration. They provided a door suggesting a deeper meaning for the main or foreground subjects. In this case, the mirror disillusions us offering a true reflection of a rather plain young woman whose curvaceous back misleads us into assuming she is altogether beautiful. It has also been noted that Venus’s face seems much older compared to the body; this has been interpreted as a warning about the ephemerality of beauty, that nothing lasts forever.

Others, however, suggest that Venus’s self-absorption with her beauty is an allegory of Spain’s strutting self-satisfaction with its role in Europe (in which case the plain face in the mirror might be interpreted as the real “face” of the country).

Or possibly that Velázquez is playing with the idea of the viewers’ position vis a vis Venus, creating the illusion that we are privileged witnesses of her beauty. We see the back of Venus, but she can also see us behind her via the mirror. We are, then, drawn into an intimate moment in a way similar to the illusion created in Christ in the House of Martha and Mary. Velázquez creates the illusion that we share the same space/ are in the same room as Venus at the same time that we observe what’s going on from our vantage outside the painting. That is, we are both inside and outside the painting.

The painting’s history contains an interesting social anecdote. On March 10, 1914, it suffered several slashes with a meat cleaver by a suffragette, Canadian-born Mary Richardson, as it hung in the National Gallery. Richardson, who later became a follower of the fascist Oswald Mosley, objected to the arrest of Emmeline Pankhurst. Labeled “Slasher Mary” by the press, her justification for destroying the painting was an attempt to balance what she considered the Government’s destruction of Emmeline Pankhurst: “I have tried to destroy the picture of the most beautiful woman in mythological history as a protest against the Government for destroying Mrs. Pankhurst, who is the most beautiful character in modern history.” In a later interview, she gave a reason that might be more in line with modern day feminists: “I didn’t like the way men visitors to the gallery gaped at it all day.”

The Rokeby Venus (1644-48) is one of nine works Velázquez painted dealing with mythological figures and differs considerably from the others in that it is the only female nude. The others are: Los borrachos aka Bacchus or The Feast of Bacchus (1628-29), completed just before he undertook his first trip to Italy (1629-31). It was followed shortly after by his second mythological work, The Forge of Vulcan (1630) done in Rome. The remaining 7 were painted between 1638 and 1659: Mars (c. 1638), Las hilanderas aka Fable of Arachne (c. 1656-58),  and finally a series of 4 works he painted for the Hall of Mirrors in Madrid´s Alcázar Palace. Of these only one has survived: Mercury and Argus (1659). The others, Apollo slaying a Satyr, Venus and Adonis and Psyche and Cupid were lost when the Alcázar burned in 1734.