Velázquez. Las Hilanderas or The Fable of Arachne.
Las Hilanderas (1655-60) is one of Velázquez’s last paintings and one of his most complex. For long it was viewed primarily as a genre painting depicting women at work in the Royal Tapestry Factory of Santa Isabel in Madrid.

The genre interpretation changed in 1948 to a reading based on the myth of Minerva (sometimes known by her Greek name Pallas or Pallas Athena) and Arachne following the research of Diego Angulo, art historian and Director of the Prado Museum (from 1968-70). Of course, the painting retained its generic attribute in that it represented realistically what a tapestry workshop must have looked like in the 17th century and, as such, is a useful historical record. But with Angulo’s contribution, the painting acquired added depth.

The Mythical Background.
Las hilanderas is Velázquez’s rendition of an episode from Ovid’s Metamorphoses (Book 6, lines 1-145) which describes a contest between Minerva –goddess of the arts (including weaving, spinning etc.) and of war– and her human rival Arachne.

Briefly, Arachne, a young woman of very humble background, prided herself on her artistry as weaver/spinner and embroiderer. So skilled was she that the nymphs would leave their groves and fountains to watch her.  It was enough to make one believe that Minerva herself had taught her.  Offended, Arachne indignantly denied that she owed Minerva any debt, and challenged the goddess to a contest, adding that if she lost, she would pay the penalty.

Such pride annoyed Minerva, who then disguised herself as an old woman and appeared before Arachne to give her some friendly advice: to be satisfied with being recognized as the best human weaver but to accept that she could not compete with Minerva and beg forgiveness for her presumption. Arachne reacted unwisely, insulting the disguised goddess, reaffirming her challenge and foolishly suggesting Minerva was cowardly in not responding to the challenge. This prompted Minerva to drop her disguise, but while the nymphs paid proper homage, Arachne maintained her arrogant attitude. At which point, Minerva accepted the challenge and the contest began.

It is this moment, the beginning of the contest, that Velázquez captures in the foreground of his painting. Ovid’s text goes on to describe the themes chosen by Minerva and Arachne. The former wove pictures of twelve of the most powerful gods and in each corner of the tapestry examples of the punishment suffered by mortals who dared challenge them. Arachne, still defiant, depicted the failings of several gods and the deceit they practiced in their lustful pursuit of women.

Arachne’s artistry was indeed so flawless that Minerva, envious and angry, tore up Arachne’s picture and struck her on the head with her shuttle/ spindle. With her pride offended, Arachne hanged herself, but Minerva intervened converting Arachne into a spider and condemning her and her descendants to weave their webs forever.

The Painting.
The painting is dominated by a detailed and realistic rendition of a 17th-century tapestry workshop in the foreground, although chronologically the contest would have taken place in classical times (obviously before Ovid wrote). The workshop is where Minerva and Arachne, assisted by three other young women, are engaged in their preparations prior to embroidering their tapestries. It is an animated scene with none of the women apparently aware of or interested in the adjoining alcove.

Minerva is at the spinning wheel to the left and Arachne is winding yarn to the right. A cat lies on the floor amidst bits of wool, heaps of fabric can be seen behind the girl to the left and piles of fleece hang on the wall to the right. The intensity of the contest is brilliantly captured by Velázquez’s innovative depiction of motion: the spokes of Minerva’s wheel are a blur demonstrating the speed with which the goddess is spinning and the outlines of Arachne’s fingers are indistinct as she deftly winds the yarn.

In the adjoining alcove in the background, there are three ladies elegantly dressed in fashionable 17th-century costumes. What are they doing there? Is the alcove a kind of showroom for the factory? The lady to the right looks directly into the workshop, as if something there has caught her attention. The other two are watching two figures standing directly in front of a large “tapestry.” These latter seem out of place in the presence of the three ladies. One — wearing a breastplate and helmet—is Minerva who, from her raised arm, appears to be lecturing the other, Arachne, dressed much like the women in the workshop.  Arachne’s pose –with outstretched arm– suggests she is rejecting Minerva’s reprimand, which would be entirely in keeping with her attitude to the goddess all along.

Lining the back of the showroom is a large “tapestry” depicting the rape of Europa by Jupiter in the guise of a bull. It is of course not a real tapestry but a rough painting by Velázquez in imitation of a painting The Rape of Europa by either Titian (a favourite of Philip II) or Rubens (a favourite of Philip IV). Rubens’s version –bearing the same title– was in fact a very close copy of Titian’s. Both artists were greatly admired by Velázquez and both paintings formed part of the royal collection to which Velázquez would have access (the Titian is now in the Isabella Stewart Gardner Museum in Boston, the Rubens is in the Prado Museum, Madrid.)

What does it all mean?
That Las Hilanderas is indeed inspired by Ovid’s tale is now widely accepted, but what Velázquez was trying to get across has generated many interpretations, ranging widely from the dangers of presumption (Arachne’s challenge to the gods) and vanity (Minerva) to the argument that the painting shows art to be a noble pursuit.

Structurally, Las Hilanderas, is organized on two clearly divided levels: the workshop activity of the hilanderas in the foreground and the smaller illuminated alcove scene beyond it, which might be viewed as signalling the painting’s alternate name The Fable of Arachne. The composition of a painting within a painting or a scene within a scene each having a bearing on the other was not new to Velázquez. As early as his Seville days, he played with this kind of configuration/ technique, as for example, in Christ in the House of Martha and Mary 1618. In Las Hilanderas, the two scenes are linked 1. By the steps leading directly from the workshop into the alcove, 2. by Minerva and Arachne seen at different moments of the contest: before and after the embroidery of the “tapestry,” and 3. by the lady to the right whose outward gaze towards the workshop not only redirects us to the workshop but also pulls us into the frame in such a way that we too are made to feel that we are in the workshop.

But what is the “tapestry” all about? Although in the “back” of the painting, it is in fact in the centre of the canvas and slightly elevated. Our gaze is drawn to it by Velázquez’s clever manipulation of perspective: our eyes move from where we “stand” in the workshop progressively through the narrow archway leading to the alcove and directly to the tapestry whose very size and illuminated location demand our attention.

We know from the subject matter that it portrays the rape of Europa by Jupiter and is a copy of the same topic (with the same title” The Rape of Europa) painted by both Titian and Rubens (see above). By doing this, Velázquez was paying homage to two of his favourite painters and both esteemed by Philip II and Philip IV respectively.

From Ovid, we know that the rape of Europa was one of several scenes depicted by Arachne in the poem. Arachne’s choice of that episode for her tapestry would not have gone down well with Minerva since it portrays Jupiter, Minerva’s father, in a poor light. Where she, Minerva, had depicted the power and greatness of the gods, including Jupiter’s proud and majestic demeanour, Arachne shows them in a negative light as seducers and cheats. From Ovid’s description, Jupiter would now qualify as a serial seducer and rapist given the number of his victims, with Europa being the first victim in Ovid’s list.

Minerva’s violent reaction, then, is born of resentment and envy at the artistry of Arachne’s work and likely too from her anger or humiliation at the public display of her father’s deplorable behaviour. In the painting, where she is dressed for battle (among her attributes, she was the goddess of war), she may not be simply reprimanding Arachne (see suggestion above) but possibly preparing to strike Arachne (indeed, in the poem Minerva does hit Arachne).

What do we make of all this? It is not merely a genre picture, but takes advantage of that genre to show us that the world of the mythical, classical gods is no different from the world of mortals. Minerva looks very much like the other women in the workshop. Furthermore, the demythification of the classical world reveals the universality of the situations in which the gods found themselves. Minerva’s pride allows her to be trapped by Arachne into a contest, her anger leads her to strike her challenger and her decision to transform Arachne into a spider suggests a vindictive and unforgiving spirit against a rival who has no supernatural powers. But neither is Arachne blameless … she is proud, boastful and rude. However, she is human and her role, in many ways, is to humanize Minerva showing the goddess (and by extension the gods) to be in fact no different from mortals.

Unlike the Italian masters’ concept of mythology as heroic and mythological figures tended to be represented on a grand scale, Velázquez viewed that world and those figures as innate in everyday reality.

The three elegant ladies in the alcove are something of a mystery. It has been suggested that they represent the nymphs who used to come and watch Arachne at work, or they are symbols of the fine arts (music, sculpture, painting). It has been argued that their elegance vis a vis the women in the workshop implies that the fine arts are superior to the handicraft carried out in the workshop.

Nevertheless, in the final analysis, the meaning –if indeed Velázquez intended there to be a meaning– of Las Hilanderas eludes us. It is a carefully crafted piece of art, displaying Velázquez’s skill and artistry. By giving prominence to the mundane world of the workshop, was he doing no more than demonstrating the interrelationship of all creative artistic endeavours? That the humble tasks of the women in the workshop could lead to or were the base of the elegance and finished product in the alcove. One was not possible without the other. The workers are treated with the same respect that Velázquez famously showed towards the marginalised in his Seville and bodegón paintings or the dwarfs in the royal household. Velázquez may have relentlessly pursued the status of nobility, but he was not so cocooned in court life that he did not recognise the value of those who laboured in the Royal Tapestry Factory of Santa Isabel. He may have paid homage to Titian and Rubens, but Las Hilanderas may also have been a recognition of those at the beginning of the creative process.

The painting was partially damaged by the fire of 1734 that destroyed the Alcazar in which it was housed. Later a wide strip (with the arch) was added to the top, along with narrower ones on the left and right. The effect is to increase the sense of depth. 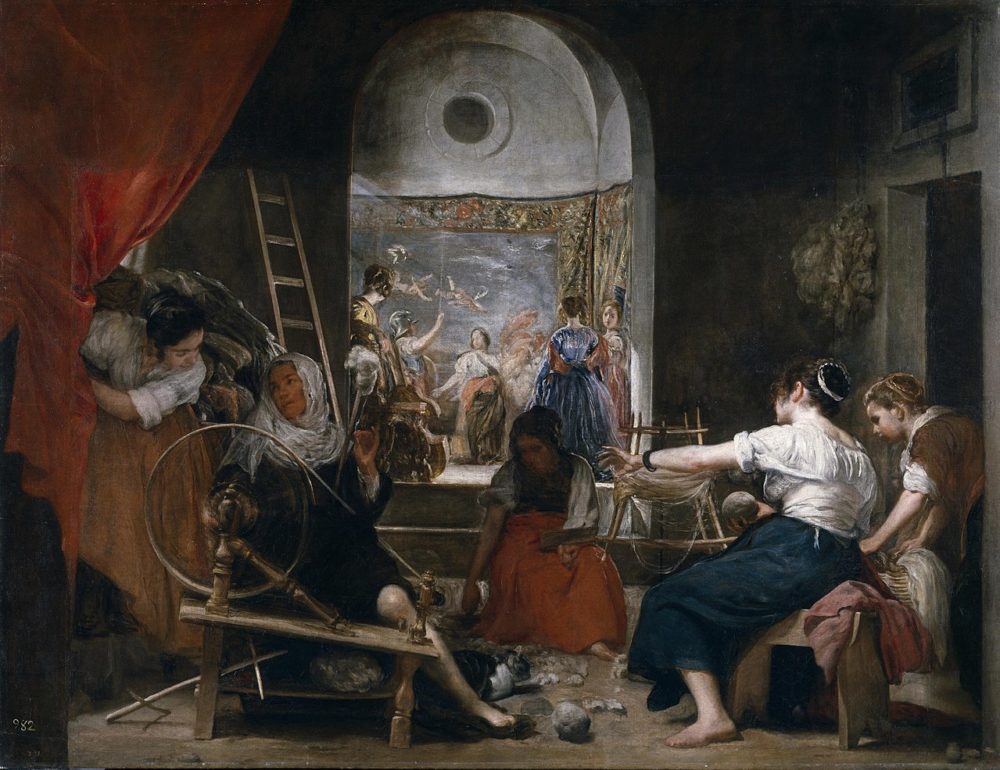