After an excellent breakfast at Casa Camila, served in a bright, airy room with views of Oviedo, we set off down to the city, armed with a map provided by Alejandro. After filling up with diesel and finding an underground parking not far from the centre, we strolled through the narrow winding streets of the old quarter to the cathedral, the main focus of our visit to the city.

Dominating the Plaza de Alfonso II (El Casto: The Chaste, so called because he died without children and possibly never married), the Cathedral of San Salvador dates from the late 14th century to the early 16th.  It replaced an earlier church built by Fruela I of Asturias in 781 and enlarged by Alfonso II in 802. All that remains of the early buildings is the Cámara Santa which contains holy relics for which the cathedral is also known as Sancta Ovetensis.

The Cathedral of San Salvador is a Gothic church, often classified as “flamboyant Gothic” because of its delicate tracery work (e.g. running up the edges of the tower and on the pinnacles or finials at the very top) and the decorative pointed arches (e. g. the door at the base of the tower and the windows above, and the third door to the left). From the square, the façade looks asymmetrical, with a 80 metre/262 foot tower rising to the right but no corresponding tower to the left. The doorway at the foot of the tower is not the main entrance, which is the large one located to its left. Compared to two of the most famous cathedrals of northern Spain, León and Burgos, the facade of Oviedo’s cathedral gives the impression of being unfinished.

The interior of San Salvador is not large (67 metres/ 220 feet by 22 metres/ 72 feet), but it is light, airy and elegantly proportioned.

Standing at the west end, you have an uninterrupted view down the nave to the large and ornate 16th-century reredos (altarpiece, aka retablo in Spain) crammed with biblical scenes. The central panel shows the Crucifixion of Christ, and, below, the Assumption and the Coronation of the Virgin Mary and, below again, a seated Christ with His right hand raised in blessing. It is a remarkable piece of craftsmanship and considered one of the best Spanish Gothic altarpieces with those of Seville and Toledo.

Above the reredos, a series of stained glass windows topped by a beautiful ribbed dome complement the sense of light in the main body of the church. The clean lines of vision down the nave came as a pleasant surprise, because so many of the Gothic cathedrals in Spain (e.g. Toledo, Burgos, León, Seville) have elaborate choir stalls right in the middle of the nave, which seriously reduce the visual impact.

As you walk down the nave, take in the graceful, ribbed pillars rising to the ceiling. 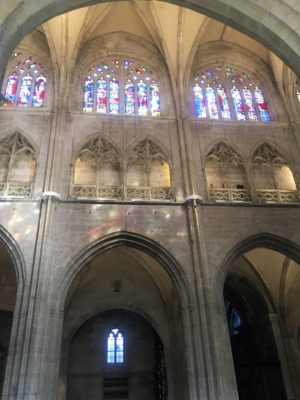 They frame the lower, simple Gothic arches, then reach up to beautiful pairs of blind Gothic windows with delicate tracery in the triforium (an arcaded wall above the nave), and end with stained glass windows framed in interlocking patterns in the clerestory (the uppermost part of the nave, rising above the roofs of the aisles, and punctured by windows). It’s an excellent example of symmetry, grace and harmony.

The are numerous chapels along the side aisles and in the apse, many embellished with lavishly ornate 17th-century altarpieces which contrast with and highlight the elegance of the building itself.

Most of these altarpieces are dedicated to various saints, including the Chapel of Santa Eulalia, patron saint of the diocese of Oviedo, whose remains were transported from Mérida in 780 and now rest in a large 17th-century shrine to the left of the main entrance.

Two altarpieces notable for their extreme ornamentation are the Retablo de Santa Teresa by Asturian born Luis Fernández de la Vega 1601-75, and the Immaculate Conception (celebration of the Virgin Mary’s purity from the moment of her conception) also by an Asturian sculptor: Francisco de Villanueva y Bardales ?-?.

The altarpiece to Sta. Teresa is florid enough with its intricate baroque embellishment, but that dedicated to the Immaculate Conception is even more extravagant, very much in the Churrigueresque style adopted in the late 17th early 18th century.  Many people nowadays may find these excessive, but they adhered perfectly to the dictates of the Counter-Reformation, decreed in 1563, that art should move the observer. One of the results of that decree was that from the end of the 16th century to the early 18th, church art and sculpture became increasingly intricate with swirling lines, and decorative details that can overwhelm the viewer, and detract from the focus of the altarpiece, whether it be Christ, the Virgin or a saint. 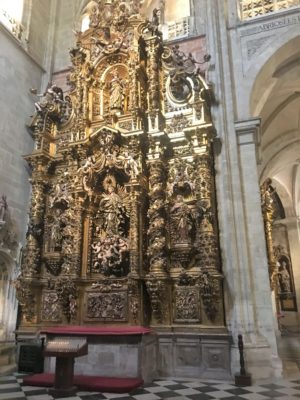 For example, the altarpiece to the Virgin’s conception is so crammed with ornamentation and movement that there’s hardly an inch of untouched space! It’s extremely busy, and topping it all, those putti (cherubic boys) beneath the Virgin and scattered elsewhere …well, they are not to our taste. It all seemed one heck of a dust collector!

We’ve left to last one of the main reasons visitors, and especially pilgrims, make for Oviedo Cathedral: the Cámara Santa (Holy Room), added as a UNESCO Heritage site in 1998 to the list of Asturian sites already approved in 1985.

It’s a two-storey building attached to the south west corner of the cathedral, constructed by Alfonso II of Asturias in the 9th century to house treasures and relics rescued from Toledo after the fall of the Visigothic kingdom in Spain. It was remodelled in the 12th century and rebuilt after an explosion destroyed much of it in 1934.

Amongst its treasures are two crosses, the Cross of the Angels (La Cruz de los Angeles), a gift from Alfonso II in 808, and the Cross of Victory (La Cruz de la Victoria) gifted to the church by Alfonso III in 908. Both are studded with precious stones. 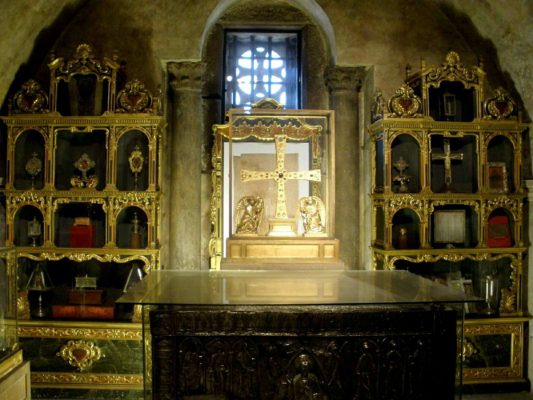 There is also a cedar-wood chest encased in gold with agate inlay and dotted with exquisite stone, dating from the early 10th century. Known as the Caja de Agata, it is believed to be a reliquary (container for sacred relics) although there are those who feel it might have been intended to protect a rare Bible. 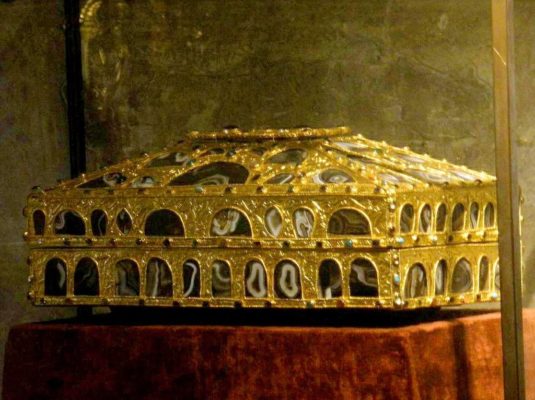 A final comment on these treasures: not only were they damaged after the explosion of 1934, but in August of 1977 they were stolen and badly smashed by the thief. The crosses and the chest were recovered shortly after, although many of the precious stones have still not been found. After painstaking repairs, the three objects were put back on display in 1989.

Because of its holy relics, the Cámara Santa attracted large numbers of pilgrims using the northern route to Santiago. But probably the most venerated of all the relics was the Holy Shroud, said to have covered Christ’s face after He was removed from the Cross.

Tradition has it that the shroud travelled with other relics from Jerusalem in the cedar-wood chest and was deposited in Oviedo by Alfonso II (the Chaste). There is much discussion over its authenticity  and its relationship to the more famous Shroud of Turin, with arguments for and against its origin. The Shroud only goes on public display three times a year: Good Friday and the 14th and 21st of September, when it is placed in the nave of the cathedral.

*************
It was well past midday by the time we left the cathedral, but there was still plenty of time to head inland again for some more exploration off the beaten path. This time it was the valley of the River Trubia, once known for its iron and coal deposits. These minerals were transported down the valley by train, but a crisis in the industries ended the mining and the railway was closed down in 1964. Happily, the railway track has been converted into a walking and cycling path called the Senda de Oso (Bear Path), part of a country wide web of converted railway lines known as known as Vías verdes (Green Routes).

Our road took us through picturesque villages, Tuñón, Villanueva, Proaza. At Caranga de Abajo, we branched left towards Las Agueras and Barzana (Quiros), our destination.

The whole valley was lush and green and narrowed significantly as we approached Bárzana. Wooded hillsides gave way to sharply defined mountain sides. Bárzena was not as picturesque as Bárcena Mayor which we had visited two days earlier, but we enjoyed an excellent rustic meal of cocido montañes (mountain stew) and trout. The road continues, but we made our way back to Oviedo and found that our way to Hotel Casa Camila was as elusive as yesterday, so we resorted to the same solution to get to it: we followed a taxi!!