Thurs. May 2. 2013 Day 16 El Burgo to Sos del Rey Catolico.
See Travel Itinerary for a rationale of this trip, a who’s who of those travelling, and our itinerary.

It was time to leave El Burgo de Osma, but first we paid a quick visit to the cathedral, the town’s main attraction.

This Gothic building, begun in 1232, replaced an earlier Romanesque church of which a few fragments of the cloister remain, embedded in the early 16th-century Gothic cloisters.

In the 18th-century, the old Romanesque tower collapsed and was replaced by the 72 metre/ 235 ft. baroque tower that dominates the skyline.

The cathedral is impressively large for a town of about 5,000 inhabitants, reflecting its historic importance in what was once frontier country between Moors and Christians.  Its museum, off the elegant Gothic cloisters, houses lots of beautiful medieval art works whose colours are still remarkably fresh and vivid.

Almost all are religious, with several of the Virgin and Baby Jesus. Looking at many of these paintings, you may notice some chronological anachronisms. For example, in the picture of the arrival of the three wise men, the clothes worn by all present belong to the Middle Ages and not the time of Jesus.

There is also an impressive collection of beautifully illuminated antiphonals (large choir books so that several singers could read them at the same time), sculptures and altarpieces.

The cathedral’s most valued work is a 1086 copy of Beato de Liébana’s Commentaries on the Apocalypse or The Revelations of St John the Divine. Unfortunately it was not on view when we were there, but we did see the stunningly carved 1258 sarcophagus of St. Peter (San Pedro de Osma), albeit only through glass from the cloisters. St. Peter was a monk from the famous Benedictine abbey of Cluny who became the first bishop of Osma (1101-09) after the town had been reconquered by Christian forces at the end of the 11th century.

It was mid-morning by the time we left El Burgo de Osma on our way to Sos del Rey Católico in the foothills of the Pyrenees, about 285 kilometres/177 miles to the north east. We took the N 122 to Soria.

This is a scenic route of forests and hills as the road ascends to Villaciervos (1179 metres/ 3867 ft.) and then descends, past an impressive limestone ridge to your left, to Soria. Modern windmills were evident as we approached Soria. They are a major source of energy in Spain, but there is no escaping that aesthetically they intrude on the landscape.

On the stretch between El Burgo de O and Soria, there was a new road under construction but when it will be completed is anyone’s guess. As we passed, we noticed that the road ended in middle of the countryside at a half-finished bridge.

The complete absence of machinery, drainage pipes scattered randomly, and the total air of abandonment pointed to a phenomenon common in Spain in its recession: projects discontinued through lack of funds. The economic downturn was evident also as we entered Soria … unfinished industrial estates and empty buildings.

At Soria, we left the N 122 and briefly followed the N 111 before turning right at the village of Garray and on to the C 115.

Here we crossed the tree-lined River Duero, starting its long journey through Castile-León and Portugal to the Atlantic. Before it reaches Soria, it flows past the old Celtiberian settlement of Numantia/ Numancia which figures prominently in Spain’s early history as a centre of resistance to Roman conquest.

Rome prevailed in 133 AD but Numancia became a legend: rather than surrender unconditionally, its inhabitants chose to set their city and themselves on fire as an example of collective will and pride.

Beyond Garray, the road passed through flat, agricultural land before rising quickly to the Puerto (Pass) de Oncala (1454 m./ 4,470 ft.). About 15 kilometres/ 9 miles further on, at the village of Villar del Río, we came to a sudden stop.

Ahead of us a bridge had been closed off. Across the bridge, there was no sign of life, and nothing to indicate where we should go. There were no other roads, only a track to our right, just wide enough to drive along. As we mulled over what to do, a car drew up behind us and, like us, had to stop. We had a brief discussion with the driver and his family about what to do, after which they decided to take the track … and we followed suit. As we bumped along the ever narrower and muddier track, we edged closer to the river to our left. To our right, we were hemmed in by trees so there was no room to turn back.

We were regretting our decision when suddenly we rounded a bend and there ahead of us was a narrow bridge. At first it looked too narrow for our van, but fortunately John has a good eye and cautiously inched us over. Back on the C 115, we breathed a sigh of relief.  Villar del Río was now behind us; during the whole detour we had neither seen nor heard anyone! 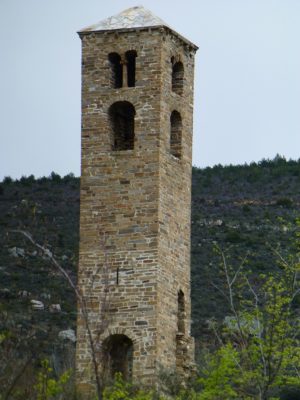 A few kilometres further, we passed Yanguas with its interesting Catalan-style Romanesque tower (all that’s left of the church of San Miguel/ St. Michael) visible from the road. In the past, muleteers from Yanguas enjoyed the privilege of travelling throughout Castile without paying any fees to enter towns. They are mentioned –unfavourably– in the epigraphs to chapters 10 and 15 of Part I of Don Quixote, Part I (but curiously they don’t appear in the text itself!).

North of Yanguas, the road wound its way along the valley of the River Cidacos, past the small town of Arnedillo (known for its hot springs) to Arnedo, dominated by the ruins of its castle.

Between the two towns, the road ran along the base of spectacularly red hills to our left, while to our right a fertile valley was dotted with smallholdings, olive groves (Arnedo has a local “Route of the Olives”) and trees: poplars, willows and ash.

The red hills are pockmarked with caves and indentations and have yielded a treasure of dinosaur bones; nowadays many of the caves are used as bodegas/ wine cellars (Arnedo is in the easternmost end of La Rioja).

John: Drive to Sos:  I was surprised by the variety of scenery on the drive from Burgos de Osma. There were the mountains in the distance of course, but we drove over a pass, the Puerto (Pass) de Oncala (1454 m./ 4,470 ft.) where we could look down on little villages that seemed not to have changed much in generations. We saw plenty of the modern windmills which I am in two minds about. On one hand, they are a clean and renewable source of energy as well as an economic opportunity for a country in desperate need of stimuli, but they do take away some of the natural beauty of the area.

In the valley of the River Cidacos, around Herce, we saw deep red sandstone walls in which there were caves used –in many cases– as storage for local wine.

******************
About 22 kilometres beyond Arnedo, we crossed the River Ebro, tacked north to Peralta and then again east to Sádaba with its imposing, restored 13th-century castle silhouetted above it. Here we turned north, leaving the broad Ebro valley and headed directly to Sos del Rey Católico and the mountains.

Sos is a medieval, walled village quite unlike Calatañazor which we had visited the day before.

Both are ancient, both sit atop hills but in Calatañazor  the houses are made of clay and rough stone with exposed beams and we passed under crooked wooden arcades; in Sos the houses are taller, more imposing and of solid stone; the wooden doorways are sturdy and protective.

Sos’s pedigree is more noble, too, being the birthplace of Fernando/ Ferdinand II of Aragón, (1452-1516), husband of Spain’s most famous queen, Isabella (together the formidable couple are known as Los reyes católicos/ the Catholic Monarchs).

We had stayed in Sos back in 1978 and remembered fondly its maze of narrow, twisting cobbled streets and the solid stone houses and mansions with flowers and plants trailing from their balconies.

They were still there, as were the hidden corners, the Palacio de los Sada (where Ferdinand was born) and the impressive 16th-century town hall in the small Plaza Mayor.

On our previous visit, we had a wonderful stay at the parador (state-run hotel), but this time we chose El Sueño de Virila, a small casa rural (roughly: country house, but here closer to a B and B) near the edge of the village. It turned out to be an excellent choice, and of the many fine hotels we stayed in during our trip (and none was poor), El Sueño was in the opinion of all six of us the best experience.

Lovingly restored over 15 years with exquisite taste and elegance by the owners, Javier and Farnès, its historic ambience is an experience in itself.

Originally a synagogue, it was transformed in the 16th century into a mansion which fell into decay in subsequent years. There are only 6 rooms, all with beamed ceilings, wooden floors and their own individual charm. The furniture is modern, elegant and tasteful and the ancient stone walls are decorated with colourful paintings by Javier and Farnès’s son, Victor.

There is a lounge/library at the disposal of guests on the second floor, and on the upper level a stunning lounge with tremendous views of the countryside. This is the place to take an afternoon tea or coffee and watch the sun set over the hills.

An alternative to the lounge for relaxation is an ample terrace, which sits on top of the hotel’s garage.

Both Javier and Farnès are charming and attentive, speak English and have many suggestions for what to do and see in and around Sos. Web page:http://www.elsuenodevirila.com/

It had been lovingly restored, marrying modern conveniences with authentic and traditional design. We were given an opportunity to see family photos of the different stages of renovation over the last 15 years and we were tremendously impressed with the attention to detail in all that was done. It is built right into the walls of the town and provides lovely views of the surrounding farmland.