Wed. May 1. 2013. Day 15. Berlanga de Duero, San Baudelio, Gormaz.
See Travel Itinerary for a rationale of this trip, a who’s who of those travelling, and our itinerary.

We left El Burgo de Osma early after a nice buffet breakfast at our hotel, II Virrey Palafox, and headed south on the C116 in the direction of the ancient town of Berlanga de Duero. The weather was again pleasantly warm, and the sky –although fairly cloudy—had enough blue for us to feel optimistic about the day. A rolling landscape of red earth, white pines, wild flowers and cereal crops flattened out as we approached the Duero River. After 24 kilometres/15 miles, we turned right and in a few minutes entered Berlanga, dominated by its massive 15th-century castle.

Berlanga forms part of the Route of the Cid, based mainly on the places mentioned in Spain’s most famous epic poem, El Cantar de mio Cid (The Song of the Cid). The poem was inspired by the life of the Castilian noble, Rodrigo de Vivar, during his second exile from the court of Alfonso VI of León-Castile, begun in 1089. Ironically, the second exile came shortly after Rodrigo had been given lordship over Berlanga by Alfonso.

According to the poem, the Cid’s daughters stopped in Berlanga on their way to their father’s headquarters in Valencia, after having been treacherously betrayed and whipped by their husbands.

We didn’t stay long in Berlanga because our destination was the hermitage of San Baudelio, about 8 kilometres/5 miles to the west. You can’t see the hermitage from the road, but shortly after the village of Casillas de Berlanga, you turn right and ascend a narrow paved trail for about 800 metres/875 yards. The hermitage appears suddenly around a corner: a small stone-built rectangle with a tiny apse, two doors and two minute windows. It stands in solitude near the top of a stony hill covered with gorse and other shrubs.

For centuries, San Baudelio lay forgotten and was rediscovered in the late 19th century and purchased by some villagers from nearby Casillas de Berlanga.  It sprang into prominence in the early 1920s when an American collector, Gabriel Dereppe, bought the contents of the hermitage, specifically a remarkable series of frescoes that covered the interior. This sparked an outcry and triggered a law suit that dragged on for four years before permission was granted by Spain’s highest court for the sale to go ahead. Fortunately, not all the frescoes were transferred, but you can see those that went to the USA in the Boston Museum of Art, the Metropolitan Museum in New York, the Cincinnati Art Museum and the Indianapolis Museum of Art.  A sample can also be seen in the Prado Museum in Madrid.

Margaret and I had visited San Baudelio in 2008, but much to our disappointment the hermitage was closed. This time we breathed a sigh of relief when we saw that the small horse-shoe door was open.

San Baudelio is a Mozarabic construction of the late 11th century, built over a hermit’s cave. The Mozarabs were “arabised” Christians of Hispano-Visigothic origin who lived in or fled from al-Andalus (as the Muslims called the land they occupied). Those who fled carried with them their Hispano-Visigothic traditions albeit much modified by Moorish influence. San Baudelio is an excellent architectural example of the hybridisation resulting from the close contact of these two cultures.

On entering, we were reminded how tiny and rustic the place was… about a dozen steps and we had crossed the earthen floor of the nave. As our eyes adjusted to the light (the main source of which was the double horseshoe door), we almost walked into one of the most remarkable features of the building: a large central column supporting eight ribs which spread out like palm leaves to support the roof.  Ribbed ceilings were already a feature of Moorish architecture and later became one of the outstanding characteristics of Gothic architecture.

Behind the column and supported on a series of remarkable horseshoe arches is a small choir, accessible by uneven stone steps to the left of the column and a tiny door from the hill outside. 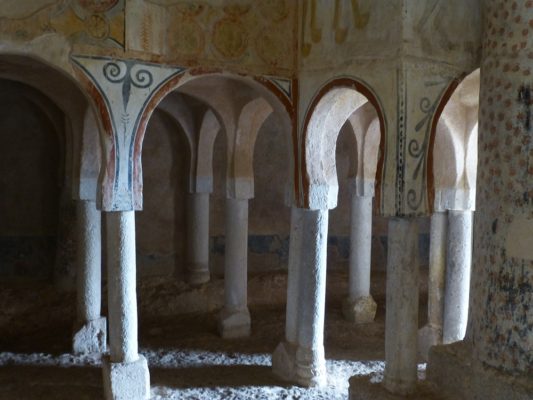 A shaft of light lit up the arches and, looking at them, we could have been in a tiny mosque, so much did they remind us of Moorish arches. Horseshoe arches were already common in Visigothic churches of the 7th and 8th centuries, but their repetitive use –as e.g. in Córdoba’s mosque– is such that many people associate horseshoe arches exclusively with Moorish architecture.

As for the frescoes, what is left is still very impressive, including the  traces left behind by those taken to the USA.

There has been a lot of debate about what they mean, and whether they are the work of one or more artists or come from one studio. What is clear is that there are two general themes to the paintings: the upper level frescoes draw on the life and death of Christ and the lower depict secular scenes such as hunting or falconry. On the choir wall above the series of horseshoe arches, there are unusual pictures of a bear, camel, and hunting dogs on hind legs, perhaps inspired by bestiaries popular at the time.

We were fortunate to be the only visitors while there, and were able browse at will.  Occasionally, the caretaker explained what some of the pictures represented. JLAA ventured into the hermit’s cave, which burrowed well into the hillside. Not for Margaret and me … too much bending and too claustrophobic!

Once outside, we wound our way up between stones and shrubs behind the hermitage for some terrific views of the surrounding countryside. Stony hills and a green quilted valley, the distant bleating of sheep and for the rest … silence.

It was stunning and moving, and it wasn’t difficult to imagine how anyone in search of solitude would find this spot ideal.

As we drove off, a busload of tourists arrived and the quiet was broken as they clambered noisily out of the bus. I can’t imagine what it would be like with so many inside the hermitage’s intimate space, but I’m glad that we were able to experience its magic in something like the silence that its earliest users experienced.

We next headed back to Berlanga and then took a minor road, the SO 160, towards El Burgo de Osma. As we approached the Duero River, we could make out an enormous crag topped by the silhouette of a massive castle. This was the Moorish castle of Gormaz, one of the largest castles in Europe and our next destination. A side road up took us through the tiny village of Gormaz, past its cemetery and the hermitage of San Miguel de Gormaz and then, turning sharply, climbed steeply up the rocky hillside to a parking lot below the castle’s main entrance.

As you approach it, you realise that this ancient fortress is in need of a lot of restoration.

Even so, it still looks formidable, with its 28 rectangular towers and a length of about 370 metres/404 yards and a circumference of roughly 740 metres/800 yards. Built between 961 and 976 by the caliph al-Hakam II on the frontier with Christian lands, it looks impregnable but was in fact taken by Christians and Moors in turn. One of the most famous leaders of Moorish Spain’s who used the castle was al-Mansur. From Gormaz, he launched numerous raids on the surrounding areas, seizing El Burgo de Osma in 989. In 1002, he was fatally wounded on another sortie in nearby Calatañazor.

In 1059, Gormaz fell definitively to the Christians who, over time, made several changes, including the construction of the torre del homenaje (the keep). Keeps were not features of Moorish castles, and the keep we now see is not the original but a 14th-century Mudéjar reconstruction.  Among those Christians who enjoyed lordship over the castle was the Cid, when Alfonso VI granted it to him in 1087.

Inside, the castle consists of a large, elongated open area (which housed the soldiers), and the alcázar which includes the keep and other administrative buildings.

We were the only visitors there, and we wandered freely, taking photos of the spectacular views of the fertile Duero valley and the surrounding areas.

Using the  horseshoe arch of the caliphal gate towards the western end of the castle, you can get beautiful shots. However, a word of caution: if you have children with you, keep a close eye on them because there are gaps and open gateways and a fall over the steep edges could result in very serious injuries.

We spent a good hour in the castle, and on the way down stopped briefly at the village of Gormaz. It’s now half abandoned, but such is the fate of so many Castilian villages; there is little or no work, and young people head for the towns or cities.

Back in El Burgo de Osma, we refreshed ourselves and immediately set out for the village of Calatañazor.  Margaret and I had heard about it and unfortunately had missed it in our previous trip to the area. It was still early afternoon, so there was plenty of time; Calatañazor was only about 30 kilometres/18 miles away.

John: Castle of Gormaz: This castle is really quite something although it is really only a shell. It is absolutely enormous and I simply do not understand why the Moors would have abandoned the security of its walls to fight on the open plain. The walk/drive up to the main gates is hard enough today in lovely weather. I cannot imagine how the knights would have done it while being fired upon. There is no cost to enter and the views from here are tremendous so I would recommend going there. We were there for a couple of hours which I feel was about the right amount of time. While it is fundamentally safe, I would caution those with very young children to be vigilant as the drops are significant.