April 26, Day 10 (1) Carmona  to Córdoba
See Travel Itinerary for a rationale of this trip, a who’s who of those travelling, and our itinerary.

We left Carmona, taking the NIV E5 along the broad, fertile Guadalquivir valley to Córdoba, 105 kilometres (65 miles) to the east.  The river was away to our left, too far to see. This flat countryside, known as La Campiña, is dotted with agricultural towns. Surrounding the towns is a patchwork of cereal crops, much of it belonging to large latifundia (estates) whose origins go back to the 13th century when nobles were granted large tracts of land as reward for helping defeat Moorish forces. Most of these lands later became entailed estates, i.e. they could not be broken up.

Most interesting on this road were La Luisiana and La Carlota, two towns founded in the 18th century as part of a programme of agrarian reform. Their primary purpose was to repopulate uninhabited areas of royal land in Andalucía and improve agricultural production which the landed gentry weren’t interested in developing. A secondary objective was to reduce banditry on the main Madrid-Seville road, along which bullion from the Americas travelled. The really intriguing aspect of this programme was the arrival of thousands of German and Flemish Catholics, encouraged by the Spanish Crown with offers of free land, houses, tools, cattle and seeds. To avoid growth of large landholdings, the new owners were prohibited from increasing or dividing their property.

A dozen such towns (aka colonies or settlements) were established, from La Luisiana to La Carolina on the south eastern edge of the Sierra Morena, all distinguished by their rectangular streets, and simple churches and houses. They are a good illustration of attempts at social planning by Enlightenment thinkers in the 18th century. The project had mixed success; about half of the northern Europeans found the heat of Andalusia too much and left (the area between Seville and Córdoba is one of the hottest in Europe).  Spanish families came to replace them, but there still remain descendants of the German and Flemish pioneers, as attested by surnames still found in the areas.We arrived at Córdoba by about 10 a.m., crossed the Guadalquivir at the Puente (Bridge) San Rafael and quickly found a place to park just outside the old walls (look for P signs). Margaret and I knew that there were severe restrictions on traffic in the old town, with collapsible pillars in the middle of street entrances to cut off entry to unauthorised vehicles.

Still, we were only about 15 minutes away from the Mezquita, Córdoba’s Great Mosque, and one of the greatest architectural and cultural legacies left by the Moors in Spain. It was consecrated as a cathedral after the conquest of Córdoba by Christian forces in 1236.

Margaret, John and I had visited the mosque numerous times, but for Leslie, Andrew and Alex, it was a new experience. We bought our tickets in the Patio de los Naranjos (Courtyard of the Orange trees), where ablutions were once carried out by Muslims before entering the Mosque.

Although we were there fairly early, there were already lots of visitors crowding the ticket office. Once inside the mosque, however, it was easy to find space and quiet. The only places where crowds gathered were in front of the mihrab, the niche on the qibla wall indicating the direction of Mecca**, and the 16th-century Christian cathedral (actually choir and chancel) sitting right in the centre of the mosque.

**In this mosque, however, the qibla faces Damascus,
home of the exiled Abd al-Rahman I, who arrived in
Córdoba in 756AD.

Many people have disapproved of the Christian choir and sanctuary built in the centre of the mosque in the 1520s, claiming that its structure has spoilt the integrity of the mosque’s design.

There’s little doubt about that, but there’s no other building in the world that allows us to see so graphically the difference in the architectural practice of two major religions. The nomadic background of the early Muslims in Arabia and the lack of stone building material might have something to do with the horizontal structure of mosques, although general opinion is that their design was inspired by the simple rectangular form of Muhammad’s house, which also served as a mosque. Churches emerged basically from the Roman basilica, a rectangular civil structure used for meetings, e.g town halls or courts of justice. 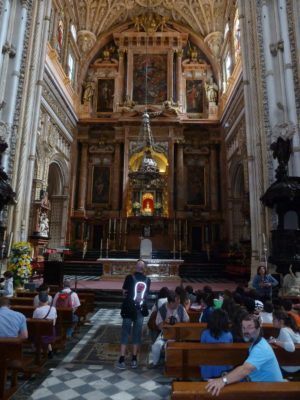 By chance, the differences in height between church and mosque tell us something of their respective congregations; in the increasingly higher churches from Romanesque to Gothic, there is a strong element of pride, a kind of reaching for the heavens; the low-lying mosque reflects the idea of submission before Allah enshrined in Islam (Muslim means one who submits him/herself to Allah). The mosque/cathedral of Córdoba does in the religious sphere what the two palaces of the Alhambra in Granada do on the secular level.

Every time we have visited the mosque, Margaret and I have found it a very tranquil place, and this time was no different. Leslie observed that she too felt the same and, to her, the mosque was a much “warmer” building than the immense cathedral in Seville, which we had seen the day before (Travel. Day 9). The mosque is also huge, in fact larger in area than Seville’s cathedral, but being low slung it is more intimate. The open arches lent an air of weightlessness and freedom as we walked unimpeded in whichever direction we chose, unlike a church where our steps are directed towards the altar. The differences between the mosque and the cathedral (and the numerous side chapels incorporated in the outer walls) do not point to the superiority of one over the other; they indicate different roads taken to reach the same God.   The mosque of Córdoba represents a unique spot where those roads meet.

We were in the mosque well over an hour, but the time sped by. Back outside, we turned left, crossed the Patio de los Naranjos and exited by Puerta de los Deanes to the Calle de Torrijos. Here we headed left, down the slope, around a tall pillar bearing a statue of St Raphael, patron saint of Córdoba, and past a late 16th-century triumphal archway (Puerta de Felipe/ Philip II) and onto Córdoba’s ancient Roman bridge. Actually the bridge, now closed to vehicles, has been rebuilt so many times that the only Roman thing left is the foundations.

At the far end of the bridge is the 14th-century crenellated Torre de Calahorra, housing a museum. Inside, life in 10th-century Córdoba is recreated through audiovisual displays.  The museum’s founder and director was a Frenchman, Roger Garaudy, one time French Catholic senator, then Protestant, then Communist and finally Muslim.

If you look downriver as you cross the bridge, you can see remains of old Moorish watermills that were used for grinding flour and watering the gardens of the Alcázar de los Reyes Católicos.  You can see the walls of the Alcázar across the road to you right as you look at the mill ruins.

After reaching the Torre de Calahorra, we wandered back over the Guadalquivir, which looked quite muddy. By now we were hungry, and I wanted to see whether a bar that I had frequented when I spent time in Córdoba was still there. We retraced our steps along the Calle de Torrijos and turned left past the Hotel Maimonides. In the past, Margaret and I have stayed a few times at the Maimonides.  Although the rooms are a little small, it is clean, comfortable, convenient and reasonably priced, and on each occasion we were fortunate to have rooms looking out on the mosque and its belfry right across the road (depending on your sleeping habits, you might find those rooms noisy since this intersection is very busy, and Cordobans go to bed late).

Once past Maimonides and the many souvenir shops selling leather and filigree goods for which Córdoba has been famous since Moorish times, we were in the Judería. We did the tourist thing and looked at some leather shops, and then hunted for the bar. Fortunately, I have a fairly good sense of direction, and it didn’t take long to find it: Taberna Rafaé on Calle de los Deanes, 2.  It hadn’t changed a bit … very much a local bar less frequented by tourists. I had liked the food there, fulsome with little fuss. We all decided on take-out Spanish omelette bocadillos, and they didn’t disappoint … big chunks of omelette in crunchy, chewy baguettes, all washed down with cold bottled water.

As we ate, we wandered through the labyrinth of narrow, white streets for which Córdoba’s Judería is well known.

As in Seville’s Judería, we glimpsed beautiful, flowered patios behind wrought-iron doorways, and heard the occasional murmur of a fountain.  Eventually, we found our way to the 14th-century synagogue, one of only three remaining in Spain.

It’s on the Calle de los Judíos, but you have to be alert because its entrance is very small so you might easily miss it. Inside, it’s tiny and although some attempt was made to control entry, it was crammed with tourists.

After the synagogue, we returned to our van; it was time to head for Almagro, where we had accommodation reserved for the night.
For other places to visit in Córdoba, see Visiting Córdoba.