The Great Mosque: History and Exterior
The Great Mosque of Córdoba (commonly referred to as La Mezquita) is one of the jewels of Islamic civilisation. It is to Córdoba what the Alhambra Palace is to Granada and the Giralda tower is to Seville, a unique focal point of identification, appropriated by Christians through conquest.

The Great Mosque was begun by the Emir Abd al-Rahman I in 785, some 74 years after the conquest of the Visigoths by the Muslims, or Moors as they are more commonly called in the Spanish context. The Mosque was added to by Abd al-Rahman II in 833, before being completed by al-Hakam II and the vizier al-Mansur in the second half of the 10th century. Of the four stages, that of al-Hakam –containing the mihrab (niche in the wall pointing to Mecca)– is the most decorative and striking.

It is believed that before the construction of the Mosque, both Muslims and Christians shared the use of the Visigothic church of St Vincent. The church was subsequently purchased by Abd al-Rahman I, then torn down and replaced by the Mosque.

The decision to build a large and striking house of worship some 30 years after his arrival in Córdoba was both an open challenge from Abd al-Rahman to his enemies in the Middle East as well as a symbolic statement to the still considerable Christian community (Mozarabs) living in the city. Abd al-Rahman was there to stay, a message undoubtedly underlined by the solid walls of the Mosque that give it a military look. It also signified that there existed in Córdoba a sufficiently large Muslim community to require a big mosque.

The growth of the Great Mosque in the 9th and 10th centuries mirrored the city’s increasing power, which was implicit also in the ever growing population and in the need to accommodate larger congregations, especially at the Friday noon prayers, which every adult male was expected to attend. It was here that the ruler or his deputy delivered his sermon and here too –during the prayers– that the ruler’s name was mentioned, so that the building had a distinctly political as well as religious dimension.

Seen from the streets outside, the Mosque is an undistinguished building, its size deceptively concealed by its modest height which rises only to some 12.5 metres (40 ft).

Except for some of the doorways, the outer walls are unprepossessing, a solid, sand coloured, pockmarked configuration that in parts seems in need of repairs. In the north west corner, the balustraded, tapering bell tower looks distinctly different from the rest of the Mosque.  It is in fact a Renaissance tower, begun in 1593, and constructed over the earlier minaret.

Unfortunately, it’s not now (2008) possible to climb the bell tower, but from the top you have an excellent idea of the size of the building, and in the background a stunning view of the Guadalquivir River, the ancient Roman bridge that crosses it, and the distant countryside.

Immediately below the bell tower is the Courtyard of The Orange Trees (Patio de los Naranjos) whose fountains were used for ablutions. The orange trees are arranged in rows, the deep green of their foliage providing vibrant splashes of colour against the dusty monochrome of the walls and the ground. A scattering of palms and cypresses also adds further colour.

The belfry also affords a perfect view of the Mosque and the Christian cathedral that emerges out of its centre as a single unit. There is no other building like it in the world, a Great Mosque and a Cathedral, in effect two different buildings representing two major religions, sharing the same space. The image is a wonderful and serendipitous architectural metaphor for the tensions between Christians and Muslims in Spain, with each temple throwing into relief the mentality of its creators.

The Mosque is low slung, seeming to hug the ground, conveying architecturally the humility before God that the term “Muslim” means: one who surrenders to the will of Allah. On the other hand, the cathedral (an addition of the 1520s, Gothic on the outside, Renaissance inside) rises upwards, its flying buttresses solidly anchored on the roof of the Mosque. 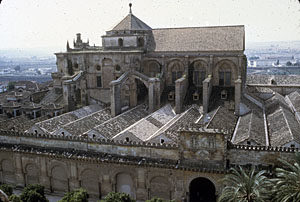 The irony of this is that the mathematics that made possible the technology to build soaring cathedrals (e.g. of Medieval Europe) passed through al-Andalus, and quite likely through Córdoba itself.  Still, there is an ironic reversal to this: although the Christians appropriated the Mosque, you can still hear local worshippers attending Mass say Voy a la Mezquita a oír misa (I’m going to the Mosque to hear mass) rather than to the Cathedral or Church!

The changes that took place after the capture of Córdoba in 1236 by Christian forces underline a difference between Muslim and Christian spirituality. The Christians constructed a wall to cut off the patio, filled in the fountains that had been used for ablutions, and in the course of time erected some 30 side chapels –adorned with small altars, paintings and figures of saints– against the interior of the walls.

However, in fairness, to the citizens of Córdoba, the Mosque, its name changed in 1236 to the Church of the Virgin of the Assumption, was always well tended. When church authorities proposed the cathedral addition of the sixteenth century it was over the objections of the people. Opposition was overcome only when the king, Charles (Carlos) V, threw his weight behind the project, without ever having visited Córdoba.

When he eventually saw in 1526 the damage that he had unwittingly committed, he is said to have exclaimed: You have built here what you or anyone might have built anywhere else, but you have destroyed what was unique in the world. (It was the same king who ordered the destruction of a part of the Alhambra in Granada to accommodate an equally incompatible Renaissance palace!)

Spanish Muslim authorities have long sought permission to pray in the Cathedral, but such requests have always been turned down on the grounds that Muslims cannot pray in a consecrated Catholic church.  Individual Muslims attempting to pray in the Mezquita have been prevented from doing so by guards.

April 2, 2010.  A group of Muslim tourists from Austria were involved in a scuffle with security guards when several of the group began praying in the Mosque on March 31.  A clash ensued after the tourists were told to stop. Two guards were wounded in the scuffle, and two of the group arrested by police who had been called in by a guard.  The tourists were accused of deliberate provocation, timed to coincide with Easter celebrations. The Muslim Youth Organisation of Austria has apologised, but claims that the actions of the guards were overly aggressive. See www.guardian.co.uk/world/2010/apr/01/muslim-mosque-fight

April 1, 2016. There has been a longstanding dispute between the Catholic church and local authorities over the ownership and name of the Mezquita. In 2006, availing itself of a law enacted during the Franco dictatorship (1939-75), the diocese of Córdoba paid €30 to register ownership of the building. It has since increasingly called the building simply “Catedral de Córdoba,” a restrictive description that has provoked widespread protest.

Since 2103, hundreds of thousands have signed an online petition organised by a group called Platform for the Mezquita-Catedral of Córdoba. They object to the diocese’s attempt to hide the building’s past as a mosque based on ideological beliefs. The regional government of Andalusia has also weighed in in support of the local council approved name of Mezquita-Catedral of Córdoba.

On March 29 2016, the Church authorities relented, explaining that in the interest of tourism and after careful study, the building would now be called the Mosque-Cathedral Monument Complex. And brochures that carried only the headline Cathedral of Cordoba have now been replaced by those bearing the title Conjunto Monumental Mezquita-Catedral/Mosque-Cathedral Monument Complex.