“Let’s go to the Mosque to hear Mass” (Vamos a la Mezquita a oír misa).  Mosque and Mass? This sounds alien to our ears, and yet it’s not unusual to hear Christian worshippers in Córdoba, Spain, say just that.

The Great Mosque (La Mezquita) of Córdoba was converted into a cathedral when Christian forces conquered the city in 1236.  Together, the Mosque and the later Christian additions make up the Cathedral of Córdoba.

The conversion of mosques into churches and vice versa was not uncommon.  It was expedient because it meant that no man power was wasted in building churches or mosques when the demands of war called.  It was also a psychological blow to both Christians and Muslims to see their houses of worship converted into something that was anathema to them.

The Great Mosque of Córdoba did not undergo significant architectural alterations when it became a cathedral in 1236.  Mainly, the openings leading from the patio (in whose fountains ablutions were carried out) were closed, and some Christian chapels were inserted along the walls.

Architecturally then, after 1236 the inside of the Mosque looked much as it did under the Moors.  Things changed, however, in the 16th century.  Overcoming opposition by the city council, and authorised by none other than the king, Charles (Carlos) V, the cathedral chapter in 1523 undertook to build a large Gothic/Renaissance chancel (capilla mayor) and choir in the very middle of the Mosque.

Charles, who had not seen the Mosque beforehand, later regretted his decision, and reportedly exclaimed upon seeing the completed alteration: “You have built here what you or anyone might have built anywhere else, but you have destroyed what was unique in the world.“

A page on the Cathedral’s web site questions the
validity of these words.  According to the page’s
author, there is no contemporary evidence that
Charles said anything; the remark first appears
in an 18th-century catalogue of the bishops of
Córdoba.  He further argues that Charles V –who
was born in the Netherlands—could hardly speak
Spanish at the time (1526), and in any case was
too committed to the defence of Catholicism to
regret any alterations to a mosque.
See www.mezquitacatedral.es –in Spanish.

Why should the cathedral chapter be so keen to undertake such a radical alteration? It certainly wasn’t for shortage of space; the Mosque was enormous. It probably had something to do with prestige.  Up to the 15th century, the three major cathedrals of Spain were in León, Burgos and Toledo (all 13th century).

At the beginning of the 16th century, they were joined by the newly finished Cathedral of Seville (completed in 1506), the largest Gothic church in Christendom. And to cap it all, a new cathedral had just begun (1521) in recently conquered Granada!  Córdoba’s two rival cities of Andalusia, then, were confirming their Christian heritage in no uncertain way, even to the point of tearing down their main mosques.

All these cathedrals were Gothic buildings, each containing a particular feature of Castilian-Leonese cathedrals: an imposing chancel (capilla mayor), and majestic choir stalls (coro) right in the middle of the nave. (Granada’s cathedral is an exception. It started off Gothic, but plans were quickly changed to those of a Renaissance church; it has no coro in the nave.) Córdoba’s capilla mayor and choir stalls fulfill that essential ingredient elevating it thereby to the ranks of the other great cathedrals, and marking its Christian identity. The cathedral hierarchy of Córdoba now had its own impressive Christian space, just like the ecclesiastic hierarchies of the other cathedrals.

Stepping directly from the mosque into the capilla mayor is a culture shock. It’s difficult to imagine another building where you can stand with one foot in an Islamic house of worship and the other in a church.

Architecturally and visually the capilla mayor is everything the Mosque is not.  It reaches –like Gothic cathedrals— to the heavens to the greater glory of God (and perhaps Man!); the Mosque clings to the ground imitating the humility that all Muslims are expected to show before Allah (the word “Muslim” means “one who submits to the will of Allah”). 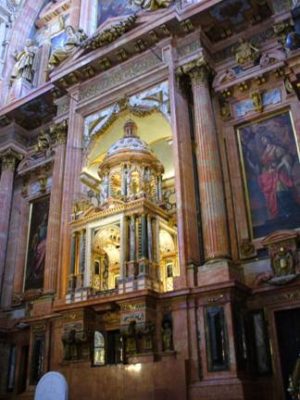 Over the years, the space within the capilla mayor and choir was filled with images and figures which are forbidden in Islam, since the adoration of images could lead to idolatry.  For Christians the paintings and sculpture that adorned the churches served a didactic purpose. In an age when the masses were illiterate, sculpture and painting offered the faithful a visual memory aid to the Bible and to Christian ethics. They could share the suffering of the saints –martyrdom was particularly effective– and could be moved by scenes of battle against the forces of evil or against the Moors.  A local topic was a big plus. The altarpiece of Córdoba’s capilla mayor, for example, contains five paintings by the 18th-century Cordoban artist Antonio Palomino, four of which depict Cordoban martyrs while the other shows the Virgin Mary ascending to heaven. 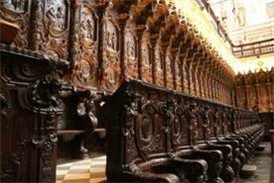 The 18th-century choir stalls, elaborately carved in rich mahogany from the West Indies, contain not only scenes from the Bible, the life of the Virgin and depictions of local martyrs but also a proliferation of decorative pieces: masks, eagles, centaurs, and a variety of stylised flora and fauna.  There isn’t a single vertical or horizontal line in the choir stalls that isn’t embossed, a much favoured technique of baroque artists.

Even the ceiling is a giddying combination of geometrical forms enclosing all kinds of decorative ornamentation.

The total effect is a feeling of constant motion as our eyes move from image to image, from decorative piece to decorative piece with no intermediate space for “rest” or reflection.  Everything is directed at moving us with an impassioned appeal to the senses, quite unlike the mosque whose slender columns and delicate arches –repeated uniformly– convey a sense of harmony and tranquility.  Even the exquisite beauty of al-Hakem II’s extension–with its multilobed arches, sumptuously ornamented maqsura and intricately patterned entry to the mihrab— is restrained compared to the Renaissance and baroque splendour of the capilla mayor and choirstalls.

Mihrab: a niche or mark on the qibla wall, the wall that points to Mecca and which all Muslims face when praying.
Maqsura: an enclosed area in front of the mihrab, reserved for the ruler and his family.