Cistercian architecture represents a transition between Romanesque and Gothic architecture. The term comes from a group of rebellious monks of the Benedictine Order of Cluny (France), who objected to the decadent life style enjoyed by the Benedictine monks in the late 11th-early 12th centuries.

The group broke away in 1098 and founded the first Cistercian abbey at the village of Citeaux –about 25 kilometres south of Dijon—with the aim of living more closely the rules of St Benedict.

The Order gathered pace under the leadership of Bernard (1090-1153), a young Burgundian nobleman who left Citeaux with twelve monks and founded an abbey at nearby Clairveaux.  By the middle of the 13th, the Cistercian Order counted about 2,000 abbeys throughout Europe.

In Spanish history, the Cistercians played a significant role in the struggles against Muslim al-Andalus. In 1147, Alfonso VII, King of Castile-Leon, took the castle of Calatrava la Vieja (Old Calatrava), which he then placed under the protection of the Order of the Knights Templar. Soon  Alfonso’s death in 1157, the Templars returned the castle to Alfonso’s son, Sancho, admitting that they were unable to guarantee protection. The challenge was taken up by Raymond, abbot of the Cistercian Monastery of Fitero (in Navarre), and one of the monks, a former knight, Diego Velázquez.  Together they gathered a group of volunteers and settled in Calatrava. There, in  1158, they formed a religious community following Cistercian rules adapted to their military situation. In 1164 they were admitted into the Cistercian Order itself.  In the same year, Pope Alexander III recognized the Order and gave it his approval. The first of Spain’s three great 12th-century Military Orders (the other two being Santiago and Alcántara) was thus born.

Advocating simplicity in all matters, the Cistercians championed an austere life style and self-sufficiency.  They practiced agriculture widely and developed an expertise in hydrology to irrigate their fields.  In keeping with their contemplative life and avoidance of materialism, they built their monasteries in rural areas, preferably in valleys and near streams.

Because of the emphasis on simplicity, sculptures of saints, biblical or daily scenes, or monstrous figures, all of which functioned prominently as teaching material for the illiterate faithful in Romanesque churches, were discouraged and frequently omitted.

The same applied, also, to stained glass, just beginning to appear in some Romanesque churches. For the Cistercians, nothing should distract from prayer and meditation. Their attitude is neatly summed up in St Bernard’s words: “What utility can there be in so many ridiculous monsters, that misshapen beauty… especially on the walls of the cloisters, under the eyes of the monks who are engaged in reading? What use have these primitive monkeys, these fierce lions, these spotted tigers, these fighting warriors, these horn-blowing hunters? Here one sees many bodies beneath a single head. On one side there is a four-footed beast with a serpent’s head; on another a quadruped’s head with the tail of a fish; here a horse with the hindquarters of a goat… In short there is such a large and prodigious diversity of animals that the marble stones make better reading than the books.  One could pass the whole day here admiring the details of each one instead of meditating on God’s Law” (Gitlitz 110).

Bridging Romanesque and Gothic architecture, Cistercian architecture partakes of both. The earlier monasteries have a more Romanesque quality e.g. the Monastery of Moreruela (1131, about 35 kilometres -21 miles- north of  Zamora), the earliest Cistercian building in Spain; later buildings reveal more Gothic elements e.g. the church of the Monasterio of Cañas (1236, La Rioja).

The ruins of the Monastery Moreruela (1131), show the preponderance of Romanesque influence. From the outside (below left), we can see how the east end looks typically Romanesque, with three small lower apses. Inside, the arches are rounded  (below right) with hints of pointed Gothic arches linking the lower circular columns (below centre). There are no carvings on the capitals of the columns, the columns themselves are solid, and the elongated windows above are small.

The Monasteryi of Santa Creus (ca.1160), the church of Santa María de la Huerta (1162) and the Monastery of Cañas (1236) are all simple and non-decorative. The Monastery of Santa Creus and the Monasterio de la Huerta still retain Romanesque features, but there is a clear evolution towards Gothic in the Monasterio de Cañas with its large of expanse of glass, its pointed arches, ribbed vaulting and elegant upward thrust. However, in keeping with the simplicity sought by the Cistercians, the windows are not made of stained glass and there are no carvings or sculpture. The ornate altarpiece in the image on the right (below) is a 16th-century addition and clashes with the serene simplicity of the rest of the interior. 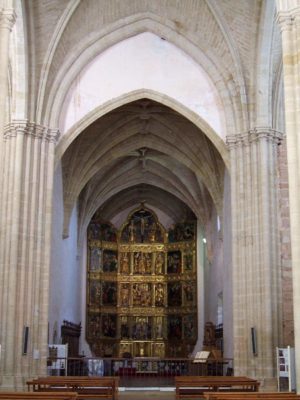