Visitors go to Granada primarily to see the Alhambra, a Muslim palace-citadel whose fame has made it one of the most visited places in Spain. Once inside, however, they are in for some surprises.

What was once a mini Islamic city now has several recognisably Western buildings, built in the century following the fall of Granada to the Catholic Monarchs in 1492.  The most prominent of these buildings is the Renaissance Palace of Charles (Carlos) I/ V.  Although it is the Muslim Nasrid Palace –built mostly in the 14th century– that people head for, Charles’s Palace is well worth a look at.

The close proximity of this Western palace to the Muslim palace affords a unique opportunity of comparing two cultures through their architecture.  It’s the secular equivalent to Córdoba’s mosque with a Christian church rising from its very centre.

Charles’s Palace, designed by Pedro Machuca (who had received his training in Italy), was begun in 1527, but never completed until the 20th!

It’s an immense granite square, enclosing a large, circular courtyard.  It is structurally imposing, as befits the imperial title that Charles wore. Its enormous façade connotes power, dignity, solemnity; it is majestic, aloof.  The heavy-looking, bevelled stones of the lower half of the façade settle the building solidly on the ground.

The impression of weight is inescapable. Straight vertical and horizontal lines predominate; square and rectangular windows are larger and more prominent than the small circular ones. A pediment over the doorway and four accompanying half columns betray classical influence, as do the triple pediments and half columns immediately above. Ionic pilasters (a rectangular column attached to and projecting from a wall) between the upper windows maintain the classical flavour.

The double arcaded courtyard is simple to the point of austere.

Its columns –Doric on the lower level, Ionic on the upper– are solidly grounded and muscular. There is no colour to speak of; it is a formal space, somewhat forbidding, even under the Andalusian sun.

The overall emphasis in this palace is on structure, the way in which loads and stresses are balanced and counterbalanced. Ornamentation is restrained both on the façade and in the courtyard. In this, Charles’s Palace follows well established principles of Western architecture.

The palace now houses two museums.  On the ground floor is the Museo Nacional de Arte Hispano-Arabe, with a large collection of artifacts from the vicinity. One treasure is the exquisite “Alhambra Vase” decorated with gazelles. On the upper level is the Museo de Bellas Artes, with an interesting collection of paintings and sculpture.

The Nasrid Palace immediately strikes us a being very different. Its structural skeleton –brick and wood– is covered by stucco ornamentation and tile. It impresses us with its sense of intimacy, weightlessness, airiness, important features of Islamic architecture.

It isn’t a single building  (some writers prefer the plural Nasrid Palaces) and doesn’t look big, although in fact its area is quite large.  Its layout is labyrinthine and lacks the order and symmetry we associate with the great European palaces, and see in Charles`s Palace.

The Nasrid Palace is broken up into several units centred around two principal courtyards, the Court of the Myrtles (Patio de los Arrayanes or Mirtos) and the Court of the Lions (Patio de los Leones). The main rooms are off these, but there are also baths, hidden alcoves, narrow passageways, secluded corners, dead-ends, and gardens, fountains and pools.

The first room we enter is the Mexuar, where the kings of Granada received their subjects.

What strikes us about the Mexuar, however, is not regal omnipotence, but a sense of intimacy underlined by the very modest dimensions of the room and the low ceiling.

From the Mexuar, we pass via the enclosed Court of the Golden Room   (Cuarto Dorado, another very intimate space, with a tiny fountain), through a narrow passage before emerging at the Court of the Myrtles. It is from here that we enter the two-storied Hall of the Ambassadors or Throne Room, the largest room in the complex.

The Hall of the Ambassadors was the centre of power, and it was here where dignitaries were received. Nevertheless, it is remarkably small for the role it played. It has four tall walls, which might strike us at first as giving the room a box-like appearance. However, any feeling that we are enclosed by walls is removed by several prominent, recessed alcoves with windows at ground level, and twenty latticed windows below the ceiling.

Light, entering through the windows, plays along the walls and reveals a profusion of different arabesque tapestries which break up the walls into several decorative components.

Geometrically patterned wainscotings and an intricate artesonado ceiling (elaborately shaped, recessed wood) add to the visual splendour of the room. Even so, what we see now lacks much of the colour that was once a feature of the Hall.  The windows formerly had stained glass, and the arabesque tapestries and the artesonado ceiling were multicoloured. How much more breathtaking it must have been to enter a room that was both intimate in its dimensions, and light and colourful in its impact!

The feeling of intimacy, weightlessness, and airiness reaches new heights in the Court of the Lions, the most romanticised part of the palace.

The difference between this courtyard and that in Charles V’s Palace could hardly be greater. This small, rectangular space has often been called a “paradise.” In the middle there is a fountain whose basin is mounted on twelve stylised lions, from whose mouths the water passes along four channels to each side of the Court.

The channels, in turn, symbolically water the numerous, slender pillars which gather at each end like a miniature palm forest, through which light is filtered. Elaborate muqarnas (honeycomb-like ornamentation) and filigree-like arabesque decoration grow out of and spread above the pillars. They evoke palm leaves, beneath which small fountains recall desert oases.

Nineteenth-century sketches of the Court of the Lions show it planted with shrubs and flowers, and it is tempting to think that it contained a garden during the Nasrid period. But there is no evidence that this was so.

The humanist, Hieronymous Münzer, and the Venetian Ambassador, Andrea Navagero, two European travellers visiting the Alhambra shortly after the fall of Granada in 1492, comment approvingly of the beautiful, large marble paving, but have nothing to say of vegetation.

Slender columns, arabesque ornamentation and muqarnas that dissolve solid lines, the interweaving of light and water… the sensation of airiness, weightlessness, and sensuous elegance in this intimate courtyard is intensified in the two lateral rooms off the courtyard, the Hall of the Abencerrajes and the Hall of the Two Sisters.  The latter, in particular, is an exquisite visual tour de force whereby the circular cupola is transformed into an octagon, which in turn metamorphoses into a square, thanks to the clever interplay of muqarnas and arabesque.

If we stand by the small fountain immediately below the cupola and look up, the impression we get is that of an exploding star cascading outwards, dissolving corners and taking on different shapes as it moves downwards to walls covered in arabesque.

As in the Hall of the Ambassadors, light from the 16 latticed windows illuminates the muqarnas (an estimated 5,000 honeycombs) in the cupola and increase the sensation of weightlessness inherent in the cascading effect.

Coming from a desert environment, Arab culture appreciated the value of water. So did the builders of the Alhambra. Both Münzer and Navagero noted its importance. Münzer observed: “The palaces are so beautiful with channels of water arranged so artfully everywhere that nothing could be more praiseworthy.  From a very high mountain, the water is brought down along a channel and distributed through the fortress ” (95).

Indeed, water is everywhere in the Alhambra; it was used for coolness, for decoration, in ritual functions in the mosques (which no longer exist), and for the practical purpose of bathing, supplying drink and irrigating the numerous gardens. It has a central function in both the Court of the Myrtles and the Court of the Lions. In the latter it symbolically “feeds” the architectural palms (i.e. columns) running around the Court, while in the Hall of the Abencerrajes and the Hall of the Two Sisters, its tinkling sound complements the visual pleasure of the rooms’ ornamentation and helps convey a sense of repose. [The sound and feel of water have a therapeutic value that modern architects have recognised by introducing fountains and pools into shopping malls.] 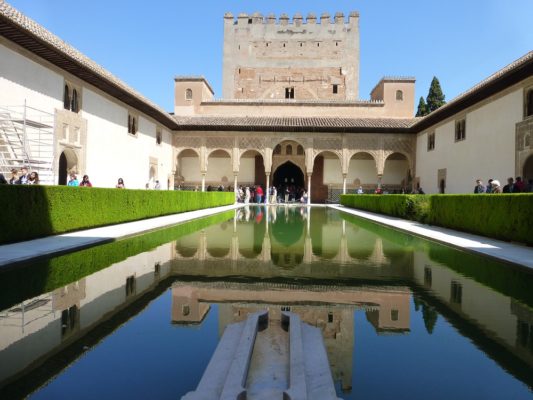 The Court of the Myrtles has a rectangular pool, with two shallow fountains splashing lazily at each end.The pool itself is the central feature here.

Stand at either end and you will see the buildings magically reflected in the water, and the material reality of the buildings dissolves into insubstantiality as they shimmer in its changing surface. Even when you stand on the long sides of the pool, the water’s mirroring effect opens up the enclosed space.

Exiting the Hall of the Ambassadors, you can see projecting itself just over the southern end of the Court of the Myrtles, the top of Charles V’s 16th-century palace. It’s a timely reminder of how buildings convey messages.  Charles was not only building a palace to reflect his imperial status, he was also asserting Western/Christian presence in the heart of the last remnant of al-Andalus, i.e. Muslim or Moorish Spain.

He had done the same when authorising the construction of a Catholic church within the Great Mosque of Córdoba. The Alhambra was a defiant gesture at a time when al-Andalus was threatened by extinction. It was an assertion of identity, a statement of its cultural heritage. Ironically, long after the demise of the political entity of al-Andalus, the survival of the Alhambra (and other Islamic buildings) has helped keep alive the history of that culture in Spain.